Callum's hemoglobin was a bit low on Monday, so our nurse instructed us to keep an eye on him over the next couple of days.  If we noticed any lethargy or paleness of his skin (face, palms, feet), then to give her a call because we may need to do a transfusion.

I started getting a little nervous yesterday afternoon - he was looking REALLY tired at one point and pretty pale.  But, he always looks pale to me now!  So, I really didn't know what to do.  Jon and I talked about it and decided to call the clinic.  I spoke with our nurse and she said it didn't sound too urgent (his activity level had perked up) but that we'd schedule a transfusion for him first thing in the morning (today).

Callum and I left the house at 6:30am - and didn't get home until 2:30pm.  To say it was an exhausting long ass day is an understatement.  It really beat me up and I was feeling pretty spent by the time we got home.  I'm learning, that for the days we have hospital visits, I shouldn't expect or plan to do anything else that day.  :/

The visit itself went great.  Callum was very unhappy to be woken up before sunrise - and taken back to the place he cannot stand.  :(   We did a blood draw at 7am and then sat in the waiting room before we were assigned our room.  We were finally ushered back to our room by about 9am or so.

Still, our team decided to go ahead with the transfusion because he was "symptomatic" yesterday (lethargic, pale, cranky) and because we're headed into a weekend which would mean an ER visit for us if he needed a transfusion in a couple of days.  I appreciated that they wanted to help us avoid an ER visit, if at all possible.  And, since we had our follow up appointment scheduled today anyway, it wasn't like this was an extra trip - it was just an extra long day.

After checking his vitals and doing an exam - they hooked him up and the long 3 hour wait for his transfusion began.  Callum watched TV while I spent the ENTIRE time at his beck and call - since he was hungry and cranky and pissy that the cafeteria wasn't delivering food fast enough.  And then, when they finally DID deliver breakfast - it wasn't to his liking.  :)

In between this song and dance, I was giving him his morning meds and discussing his lab work and general progress with the nurses.  I don't think I sat for more than five minutes the entire visit!

Thankfully, Callum's mood improved the longer we were in the room (I'm sure his body getting replenished with good fresh blood was helping!) - to the point that once the transfusion was done, he told me he didn't want to go home, but stay there (and finish his pizza).  Ha! 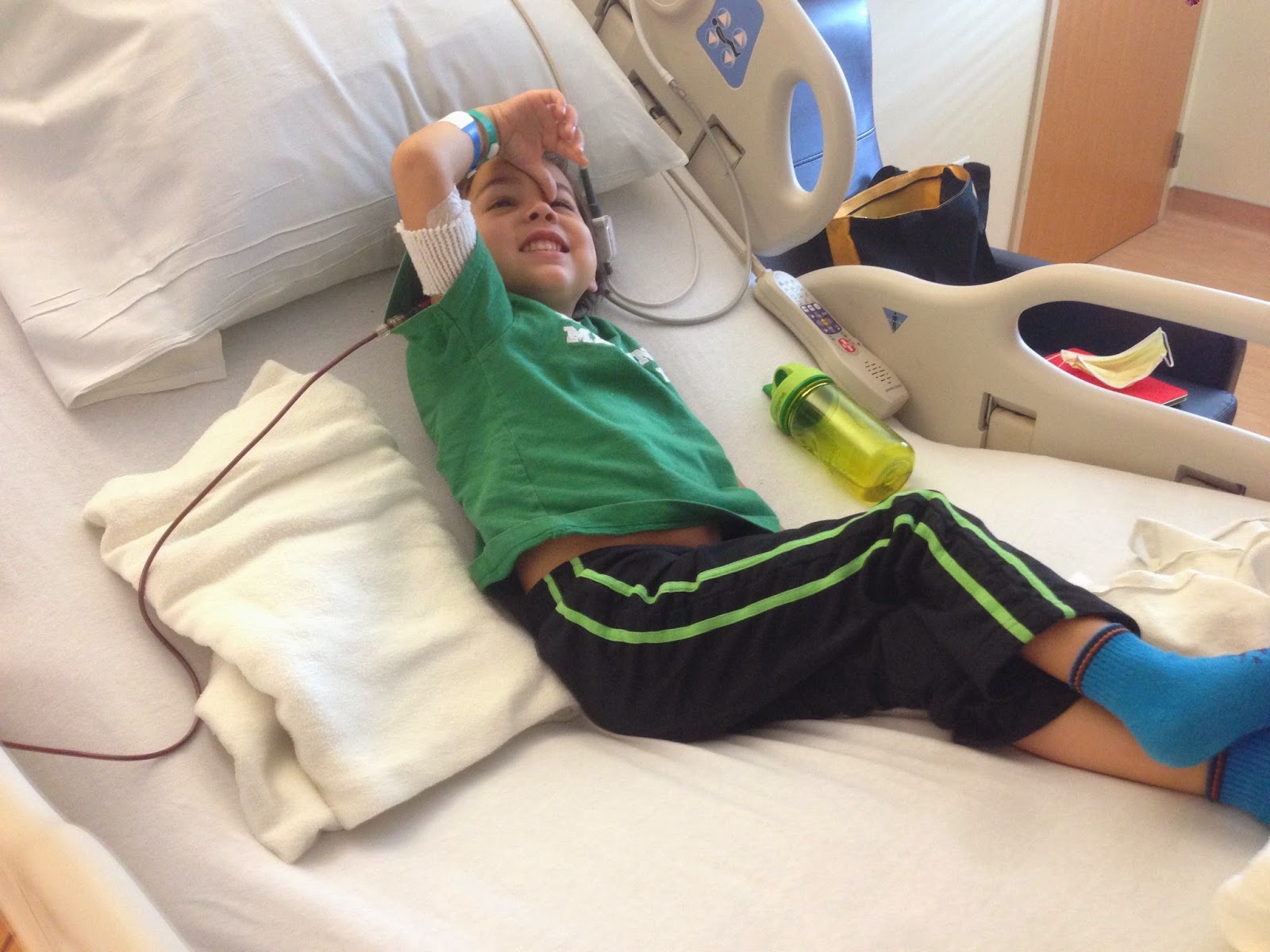 We also received good news about an MRD test our doctor had run on some of Callum's peripheral blood from Monday.  This is a test they send up to Seattle to perform, under some extra fancy shmancy magnification to look for leukemia cells, that the naked eye cannot see.  They perform this test at Day 8 (Monday) and again on Day 29 (end of induction).

His results came back negative (0%).  This is GREAT news.  Zero of the micro leukemia cells were found - which means Callum is responding really well to his treatment.  If he has the same results after Day 29 - he'll officially be in remission, and probably move forward with either Standard or maybe even Low Risk protocols.  :)
Posted by Mama Bree at 10:06 PM