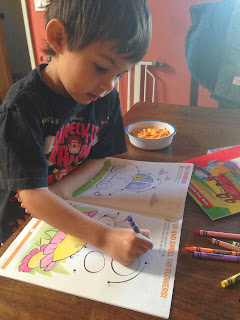 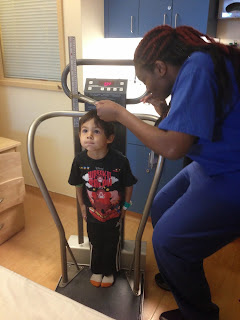 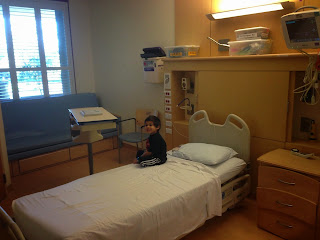 I don't have much energy to post tonight. So, I'll post a few pics I took today - the first one of Callum enjoying his new coloring books which came in a care package from the Cables. He was so happy this morning and loved his new stuff.

Unfortunately the rest of our day just knocked us on our ass.

During our hematologist consult, the doctors determined - and diagnosed - Callum with Acute Lymphoblastic Leukemia (ALL) of childhood.

We were immediately admitted to the hospital (Lucile Packard Children's Hospital at Stanford). The second pic is of Callum being his usual dorky self while they tried to get his weight and height. :)

And the third pic is of him proudly showing off his new room which he, thankfully, loves.

It has all been extremely overwhelming and upsetting to say the least. Jon and I are hit at the craziest times with waves of immense sorrow and fear. And we just don't know what to say really.

But that we've been hit with really crappy shitty bad luck.

Our afternoon has been busy with meeting an army of doctors and nurses, social workers, a(nother) traumatic IV to put in, a(nother) X-ray, stacks of consent forms to read and sign, and prep for tomorrow.

Tomorrow he will go under for a bone marrow aspiration and biopsy, a spinal tap and some initial chemotherapy treatment. They will also insert a picc line (basically a catheter, which will act like a more "permanent" IV to allow blood draws from, amongst other things, so that we don't have to continually poke him).

Best case we'll be in the hospital for another week. But we could be here for several weeks. It'll all depend on how he responds to the initial chemo treatments, and whether he gets another fever/infection, which we would need to be very careful about and care for closely.

Thanks for everyone's love and support. I haven't had the composure to call or talk or email or text at all. I'm still in shock - and a bit of denial quite frankly. I'll do my best to respond as I'm able.
Posted by Mama Bree at 11:14 PM

Wow guys u have been thru the ringer

worst luck ever. Love you all. Sending positive chi your way.

Love you guys and will continue praying...there's power in it, one day at a time.

Hey there, Breezy! I am so sorry to hear all that you've been through. I have always admired your strength and wisdom. Callum is so lucky to have you. I'm here for you if you need anything. You will be in my thoughts and prayers.