Last night was another great night (each seems to be better than the one before - yay!).  Callum didn't truly fall asleep until about midnight, but then he slept until 9:30am (with the time change, it meant 8.5 hours), when we had to wake him for his daily blood draw routine.  He did wake briefly around 5am for a pee break, but who can blame him with the fluids they're pumping into him by the minute!  ;-)  The uninterrupted sleep also meant no fever, no apparent stomach pains, and no meds for the pain.

(Side note: while Callum had a good night of uninterrupted sleep, sadly, this Mama did not)

Dr. McCracken stopped by again in the morning - she mentioned the E. Coli results from yesterday were an antigen test, which I guess isn't 100% definitive.  The final confirmation will come a few days later when they complete the stool cultures in the lab, but she says you can pretty much bet if the antigen tests positive for E. Coli, then that is what it is.

She also had early results from the morning's blood work - his platelet count was up (not a big leap but in the right direction) and his hemoglobin numbers had stayed the same - both being good news for us.  She didn't have the results back yet for the chemistries they ran to watch his kidneys.  She also ordered a urine sample since that would be another data point for us to see how his kidneys were performing (whether there's blood or proteins, etc. present)

Shortly after, Logan and Jon showed up for their morning visit.  The boys have really been missing each other.  Additionally, Logan has really been missing me, and has had a hard time understanding why I need to be at the hospital so much and not home with him.  It's an added stress that's been hard to cope with, as anyone can imagine.

I suggested after his golf practice, that Jon take him to the new Mr. Peabody & Sherman movie that just came out, since he's been wanting to see it anyway.  From what I hear, he enjoyed the treat.  :) 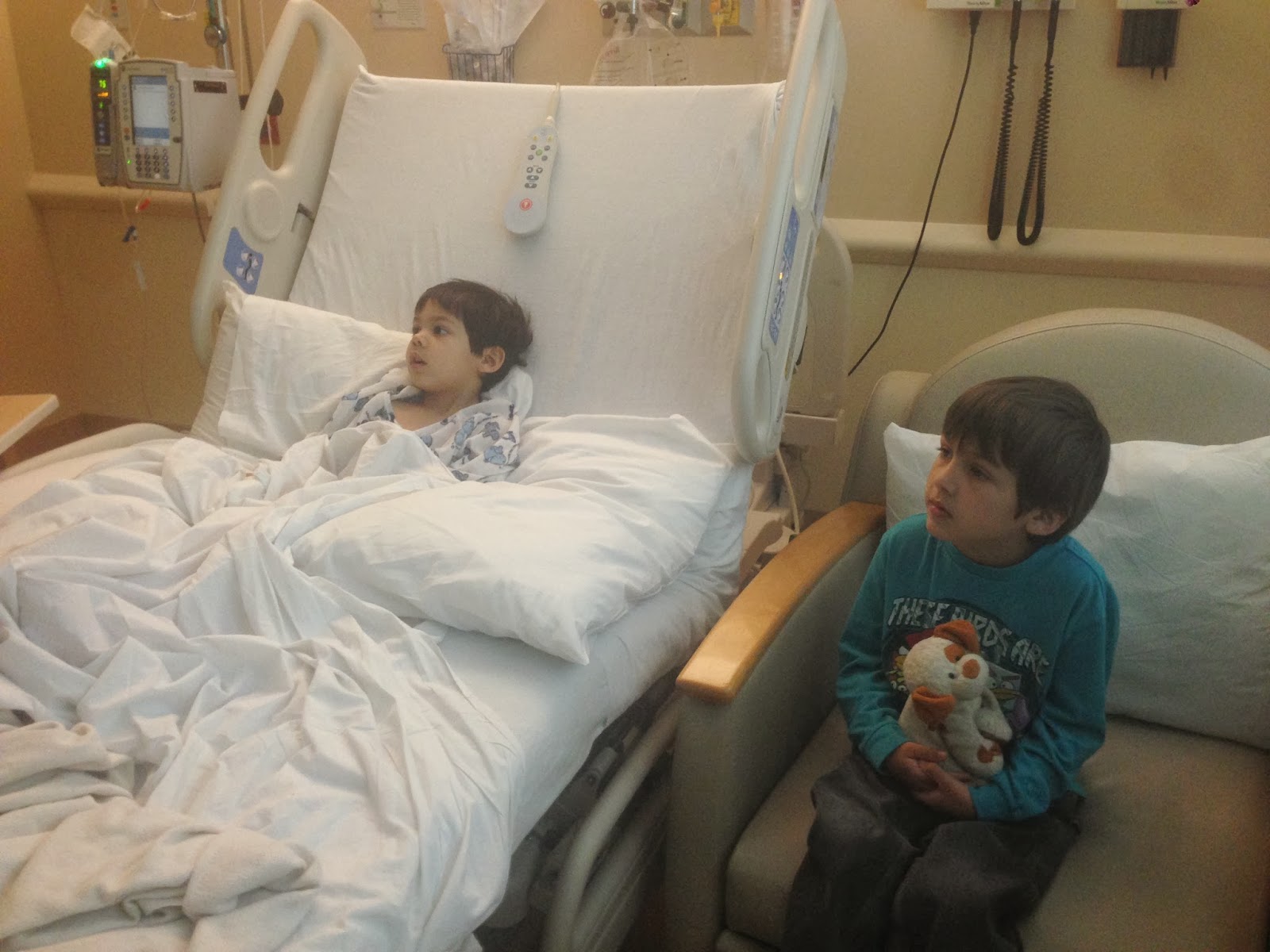 A new doctor, Dr. Gondel (who was on call today), dropped by to meet with me in the afternoon.  After studying our lab work, he was pretty positive that Callum does NOT have HUS (yay!).  There is no evidence of the kidney function failing.  Furthermore, they ran another test on today's blood to look at his reticulocyte (retic) count.  This number rises to the 10-15% range, when there's evidence of hemolytic anemia (what they were looking for, for HUS).  However, Callum's number was very low (actually BELOW the average range), which not only means he's not a candidate for HUS but NOW means, along with his low platelet numbers, that there's evidence of bone marrow suppression instead.

Cue the ups and downs of this nightmarish roller coaster ride.  *sigh*

The doctor wasn't comfortable sending Callum home just yet.  He's fairly certain that the bone marrow suppression is due to the infection (these nasty infections can cause the suppression that we're seeing) - and therefore acute and transient.  Still, he wants to make sure we're out of the clear by running another round of tests tomorrow and seeing what the lab work tells us.

Additionally, he wanted to consult with a hematologist at Stanford, to see if there were any more tests they'd like to run (or any other theories they might have, based on Callum's blood work results to date).  He said he'd get back to us later in the day once he reviewed Callum's case with the specialists.

But, he was also happy to see and hear of Callum's progress and asked me to keep encouraging him to eat and drink (Callum's appetite continues to improve bit by bit each day) and that he would lower the fluids on his IV, since he was looking and behaving much better. 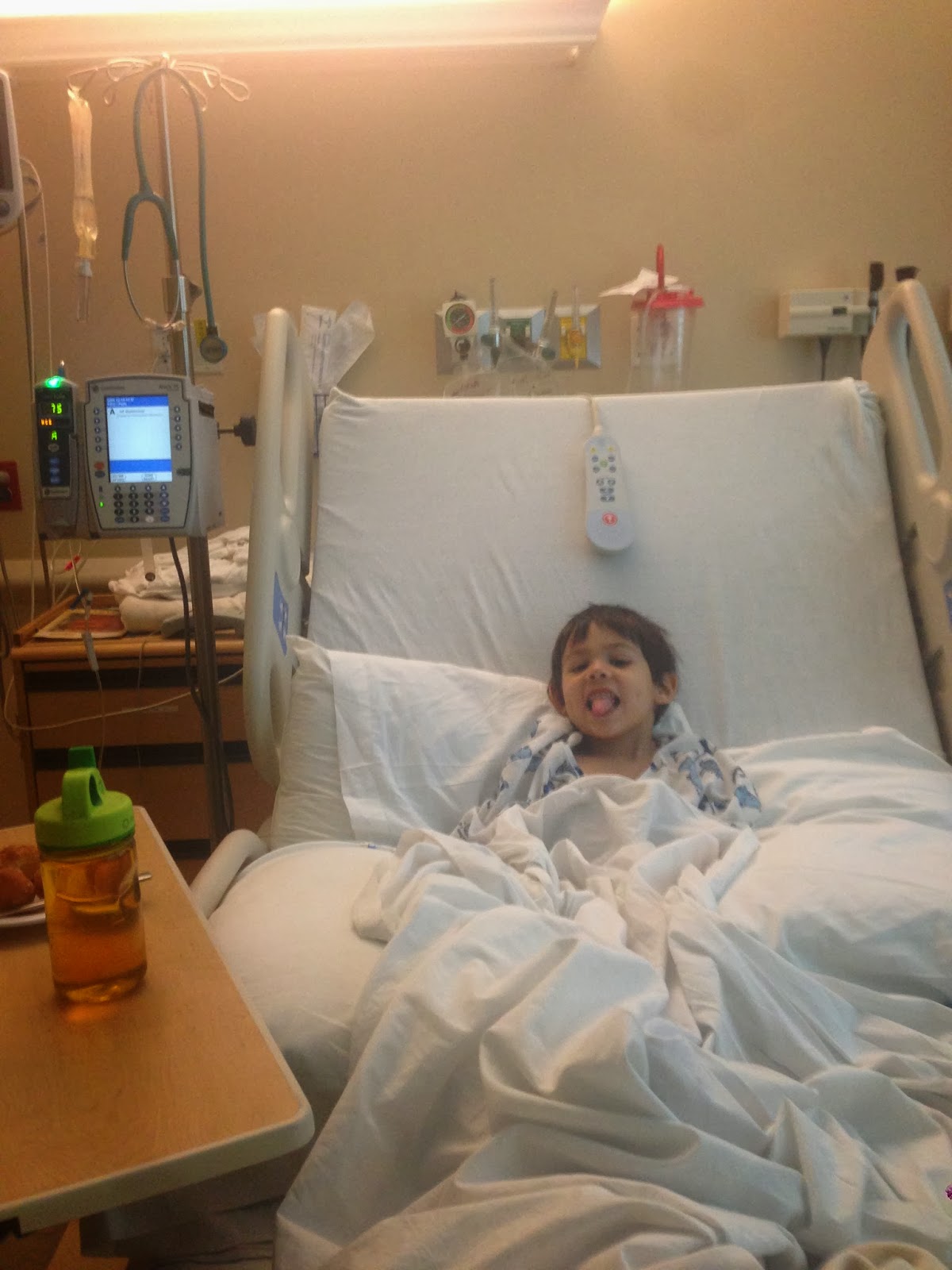 Once again, the shop-talk bored Callum into a nap (I had been TRYING to get him to nap for the past hour or two, so I was thankful he finally drifted off to sleep).  I had Jon swing by before heading home so that we could swap places and I could shower and rest up at home with Logan in the meantime. 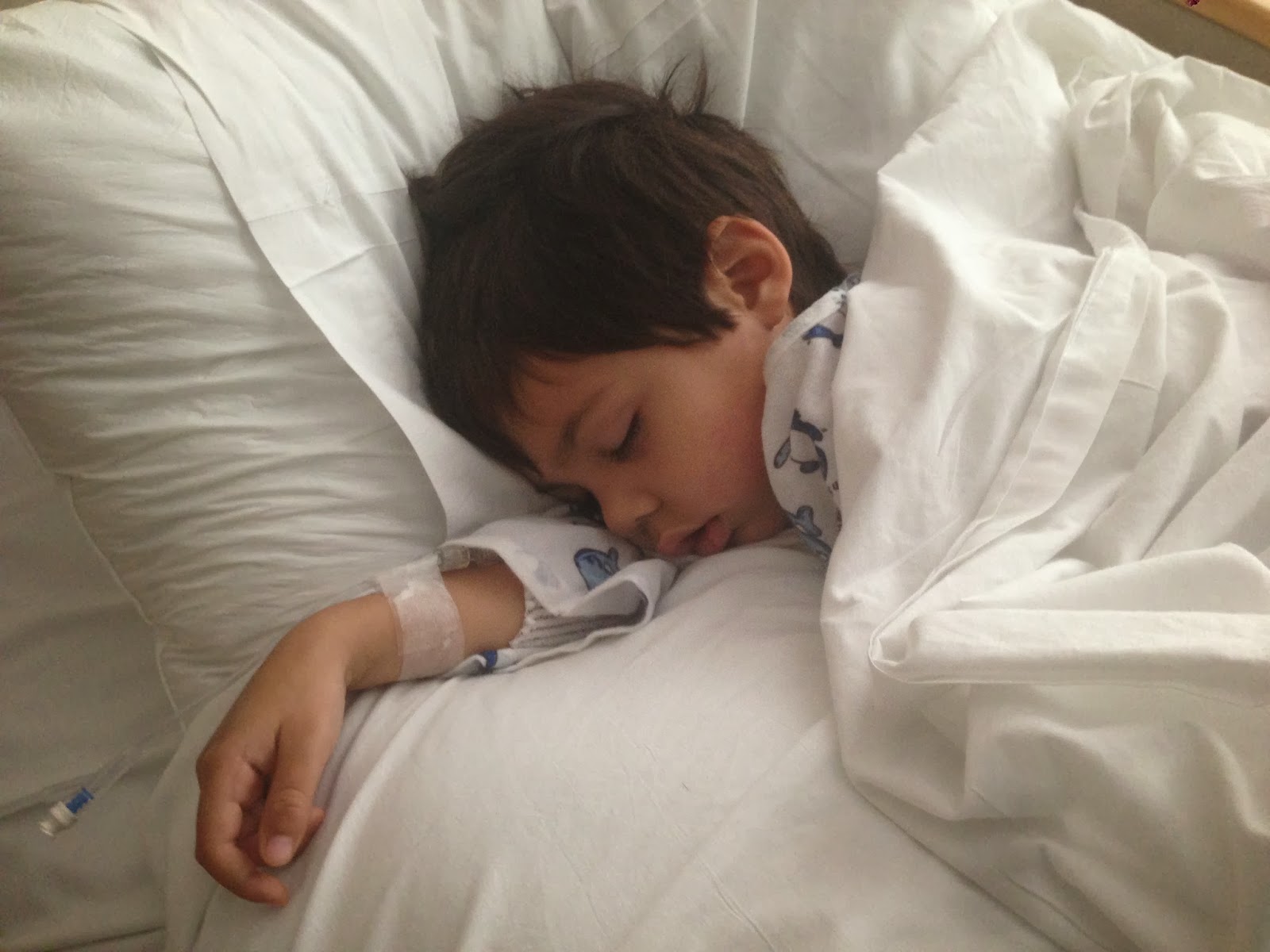 The weather was absolutely gorgeous (it's amazing how you lose track of time, when cooped up in the hospital all day long.  And it's even more amazing to breathe in a few breaths of fresh air once you walk outside!)!  Logan had been longing to do something WITH me, so we took a quick bike ride around the block a few times before heading into the house.  It was really great for the both of us, I think.  :) 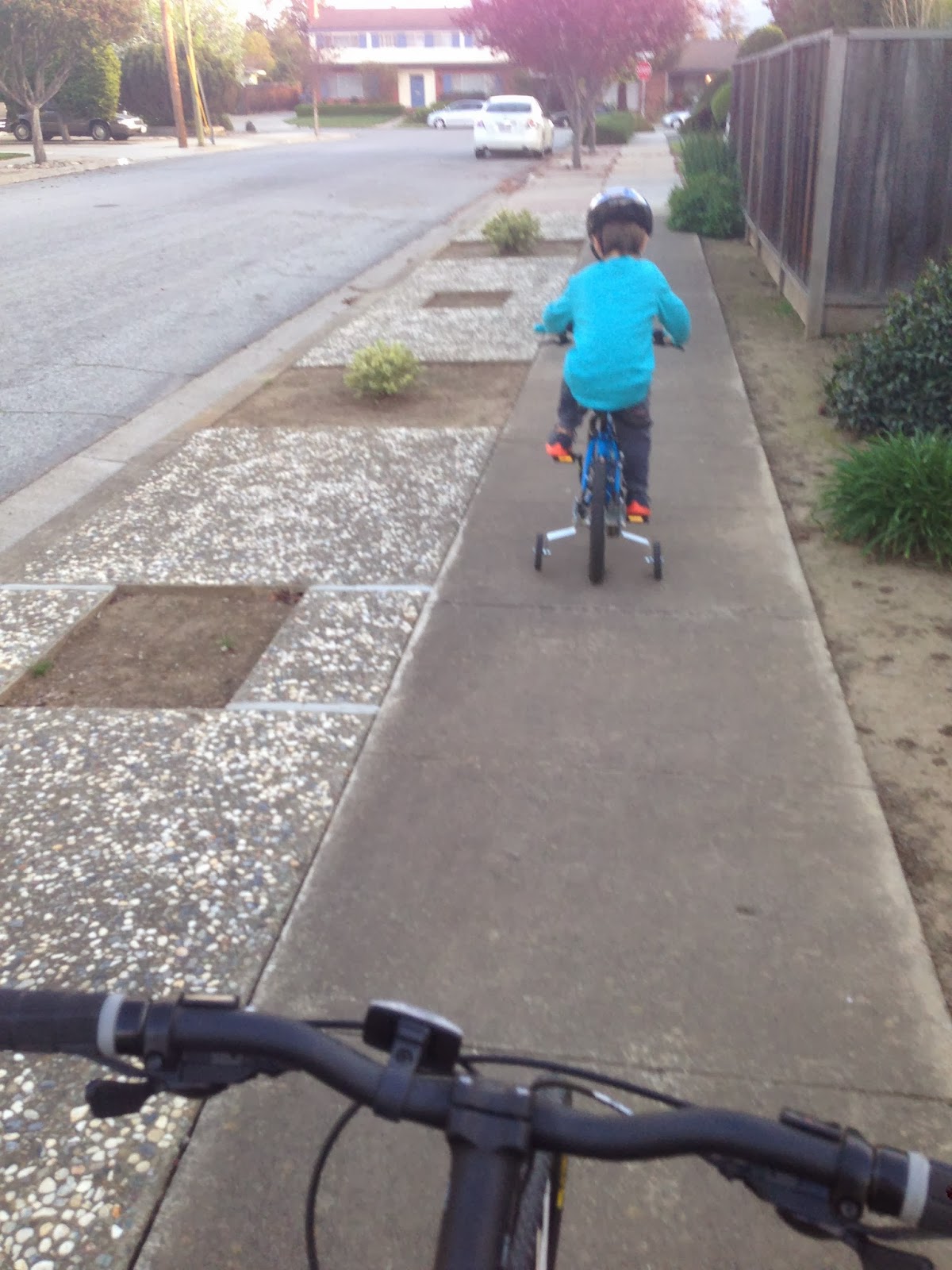 On the drive home and the drive back to the hospital, Logan and I had a couple of serious talks.  He has been very frustrated that I'm not home and am instead spending all of my time with Callum.  He also feels like no one is paying attention to, or wants to spend time with, him (which just breaks my heart to hear).  :(

I talked to him about how serious this is and that we are all trying to help Callum get well and feel better.  And that may mean he gets less attention, that he doesn't get as much time with me, or his Daddy, and that it also means I don't get as much time with him or his Daddy, etc. But that the most important thing to focus on right now is supporting, and being with, Callum, as much as we can.  I think he finally grasped it - doesn't mean he won't forget and lament tomorrow - but we did have a couple of good talks about the whole ordeal.

While I was driving back to the hospital, Dr. Gondel stopped by to give Jon an update.  The hematologist agreed that the bone marrow suppression was likely due to the infection Callum has been fighting.  They are ordering a few more tests in addition to the ones we've already been looking at, and will review all results tomorrow to see how Callum's blood is looking.  The hematologist also asked Dr. Gondel to order a chest X-ray, to check his lymph nodes or anything else we may have missed.  That doesn't give me any warm and fuzzies of course, but I realize they're just trying to be thorough.

As Jon was getting ready to go home with Logan, Dr. Safir called the room to find out the latest scoop (again, he was surprised we were still in the hospital).  After talking him through the latest, he respected how thorough the doctors have been and agreed with all next steps.  He agreed from the sound of things that it wasn't HUS and said that was terrific news since HUS was a bad bad thing that we didn't want to have to deal with.  He didn't think the chest X-ray tomorrow was necessary but also agreed they're just trying to be thorough and not to worry too much about it.

He commented that this has been a really unusual and unique case, but overall, Callum has had so many red flags that staying in the hospital and continuing to run tests to be sure was the best thing we could do.

He agreed that this is all pointing to the E. Coli infection causing the bone marrow suppression and that we just need to give it time to let Callum's little body fight it off and get back into the clear.  It was really nice to talk with him at length about everything since he's much more of a known entity than any of these random hospital doctors and specialists that pop in and out each day - he said he would also check in with me tomorrow too, which was reassuring.
Posted by Mama Bree at 11:41 PM