I've gotta keep this short and sweet since it's late, but I've been working on outlining the "plan of attack" (as I like to refer to it, otherwise known by the doctors as our "roadmap" or "protocol" we will be following).  This only applies to the first phase of our treatment - called induction, which lasts approximately one month (29 days).  There are many further phases after induction, but we don't know what those plans look like exactly yet, since a lot will depend on how Callum handles this first, most intensive phase.

The goal, at the end of induction, is that all leukemia is gone and Callum is in remission.  It doesn't mean we stop chemotherapy by any means, but this first month is critical in trying to kill any and every bad cell in his body (sadly, good soldiers will also fall as a consequence, we can get to that later).  It's an extremely intensive first month but the hope is that we hit hard and don't let up.

I've always been a pretty visual person - so I decided to lay out the plan in a "prettier" format.  ;-)  You can see poor Callum is being subjected to a number of different drugs - most several times a day, every day, for the first month. 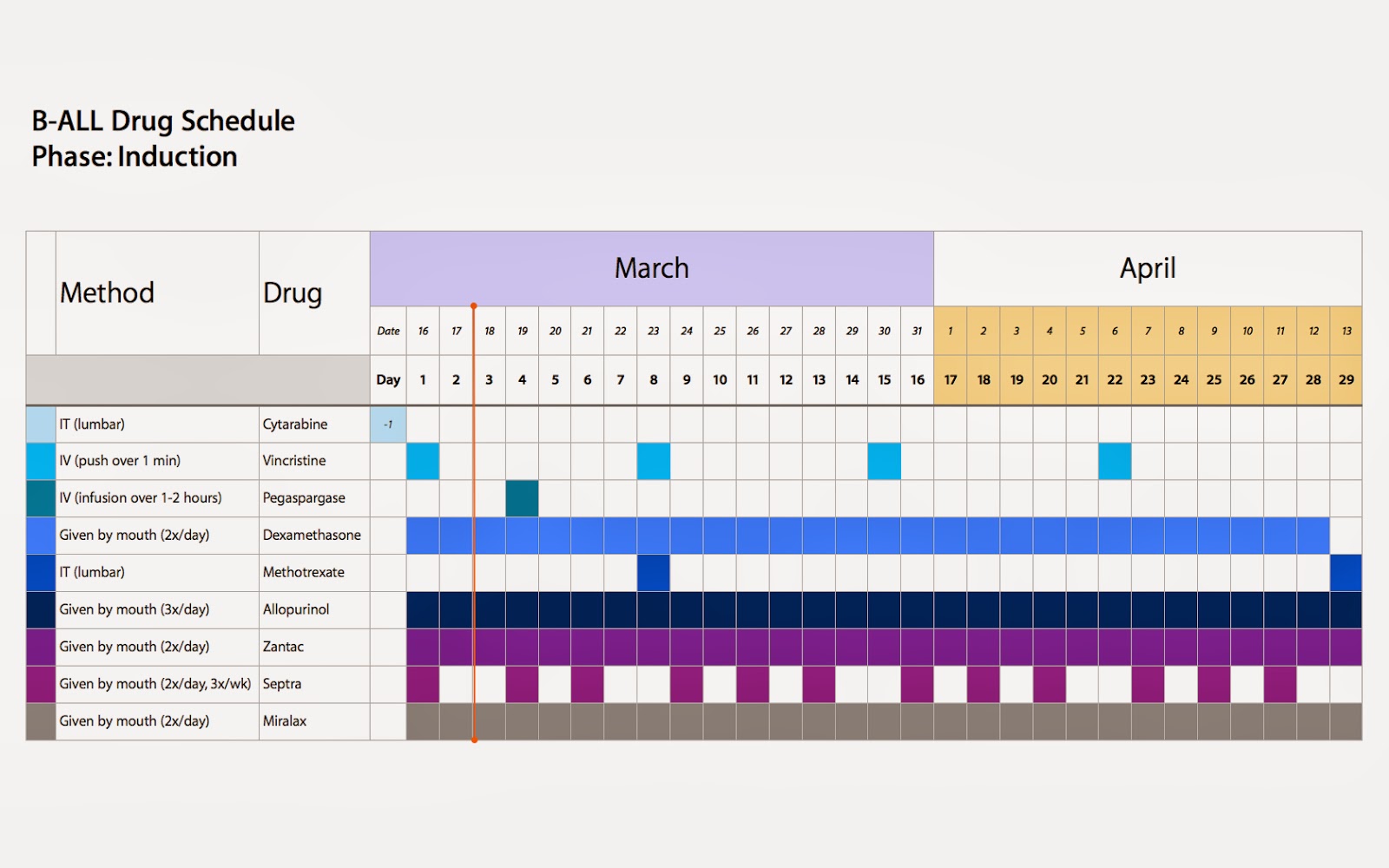 He absolutely HATES most of the medicine he has to take (by mouth, he doesn't notice anything given by IV or lumbar of course), so it's been a painful drawn out battle each time the nurse comes in with a new set of syringes for me to work on.  But, I am slowly learning little tricks here and there on how to make the time go by quicker and to sneak the meds in while he's distracted and not paying as much attention to the awful bitter tasting crap (yes, I've tasted most of them myself, to see).

The first five meds listed in the chart above are a part of his particular protocol.  However, there are several others, those four listed at the bottom, which are given "proactively" to basically combat the side effects associated with the chemotherapy drugs.

In addition, he has also been on a low-phosphorus diet for the last couple of days, since the chemo will spike up his phosphorus and his labs were showing he had somewhat elevated levels of phosphorus already in his system.  Luckily, the diet seemed to be all that was needed, and today his levels were down to normal/lower ranges which made the doctors happy.  If that trend continues, we should be able to get back to a normal diet soon (which will be nice!  one less thing to worry about)

The team of doctors and nurses watching over Callum are very pleased with how he is doing so far.  In fact, a bit of good news received today was that he may be discharged as early as Thursday! (Day 5)  While exciting, I have to admit, it's also very scary to leave the "safety" of the hospital and tackle this "on our own".  We of course, won't be on our own - and in reality, we'll be driving back up to the hospital every other day, if not daily, for checkups and appointments and blood draws.  But still, it makes me a tad nervous.

Those nerves don't outweigh the relief and sanity I think we'll feel by finally being back home though.  So don't get me wrong - we are very much looking forward to checking out and getting back into a somewhat regular rhythm again (as "regular" as we possibly can manage).  :)   Anyway, our discharge will depend a lot on how he continues to do these next few days (the big KEY issue that they continually talk about is not getting sick, and not getting a fever, since we're basically killing off both bad AND GOOD cells - so he has nothing left to fight, even the common cold).  It'll also depend on how his next chemo dose on Day 4 (Wednesday) will go.  They'll obviously monitor him actively after they begin the treatment, but they'll also watch him closely overnight.  If all is well - then to home we go!  We aren't counting on it - since we don't want to get our hopes up too high, but wouldn't that be nice.  :)
Posted by Mama Bree at 11:58 PM

I was talking to Dad earlier today and he was telling me more and more information about what is happening. I originally thought it was radioactive chemicals that they were sending into his body. I thought that the White blood cells with leukemia had a specific antibody that could be detected and was known. Then the antigen that binds to that antibody is attached to a radioisotope (nuclear) and it attaches to the leukemia cells. The leukemia cells then die. Dad told me this was not the case and it was a lot more chemical attack to the leukemia. I think that these are very bad treatments, but we get better at them everyday. Does his treatment involve any radioisotopes?