We've had a pretty good couple of days.  Mostly keeping things as relaxed as possible for Mr. Callum to lounge about.

The steroids are doing a huge number on his appetite.  When he's not queasy (which we're getting better at managing, now that I'm also overlapping with a second anti-nausea drug each day), he's got a voracious appetite.  And he's VERY specific - about what he wants on his sandwich, what size to cut his bagels with cream cheese, how to lay out the various dishes on the table. 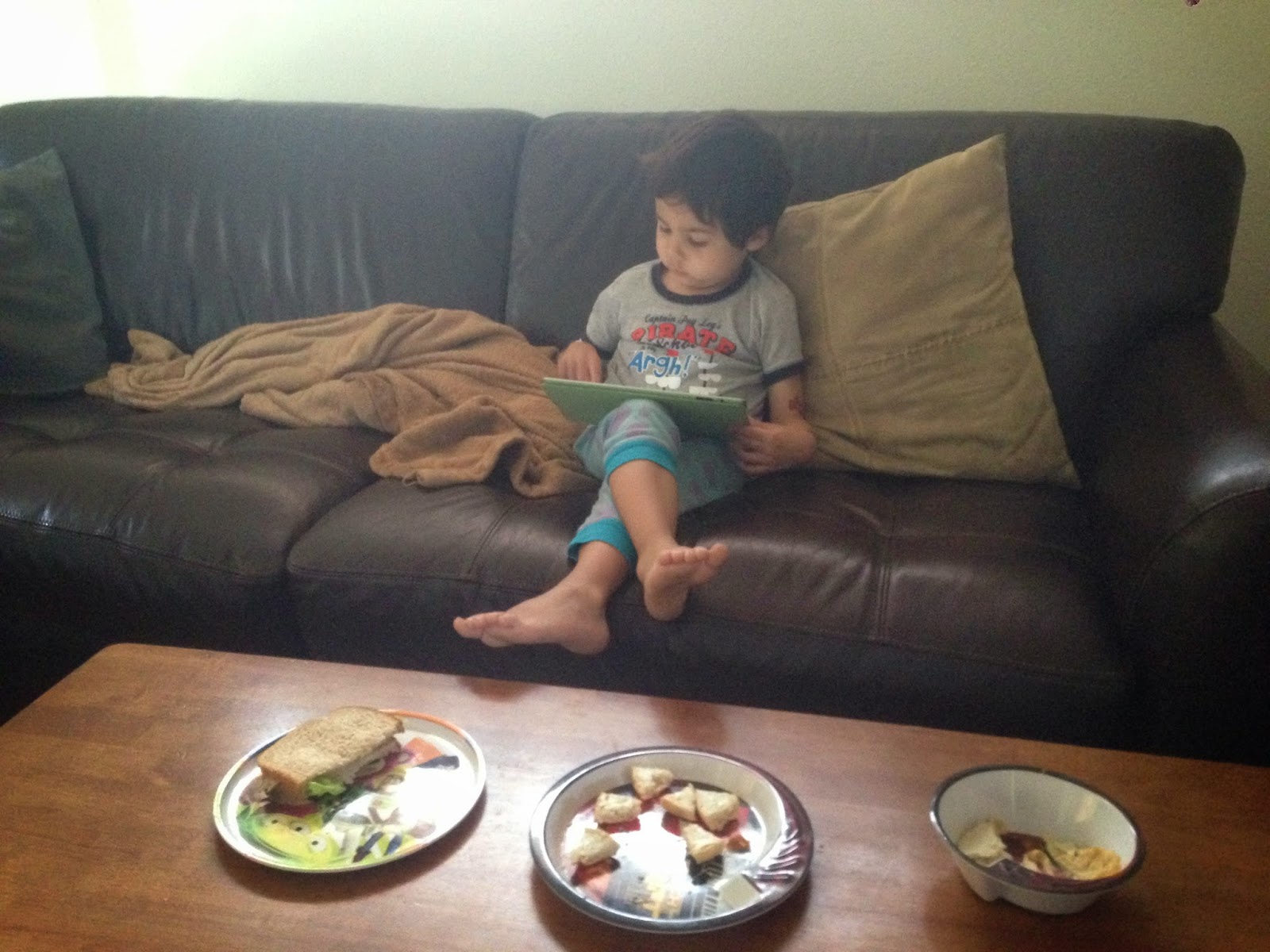 Or here, where he's instructing me that one of these will be for his chicken nuggets and one will be for his Mac n' Cheese.  To make matters worse, he tells me (or Paul) how to make everything.  :) 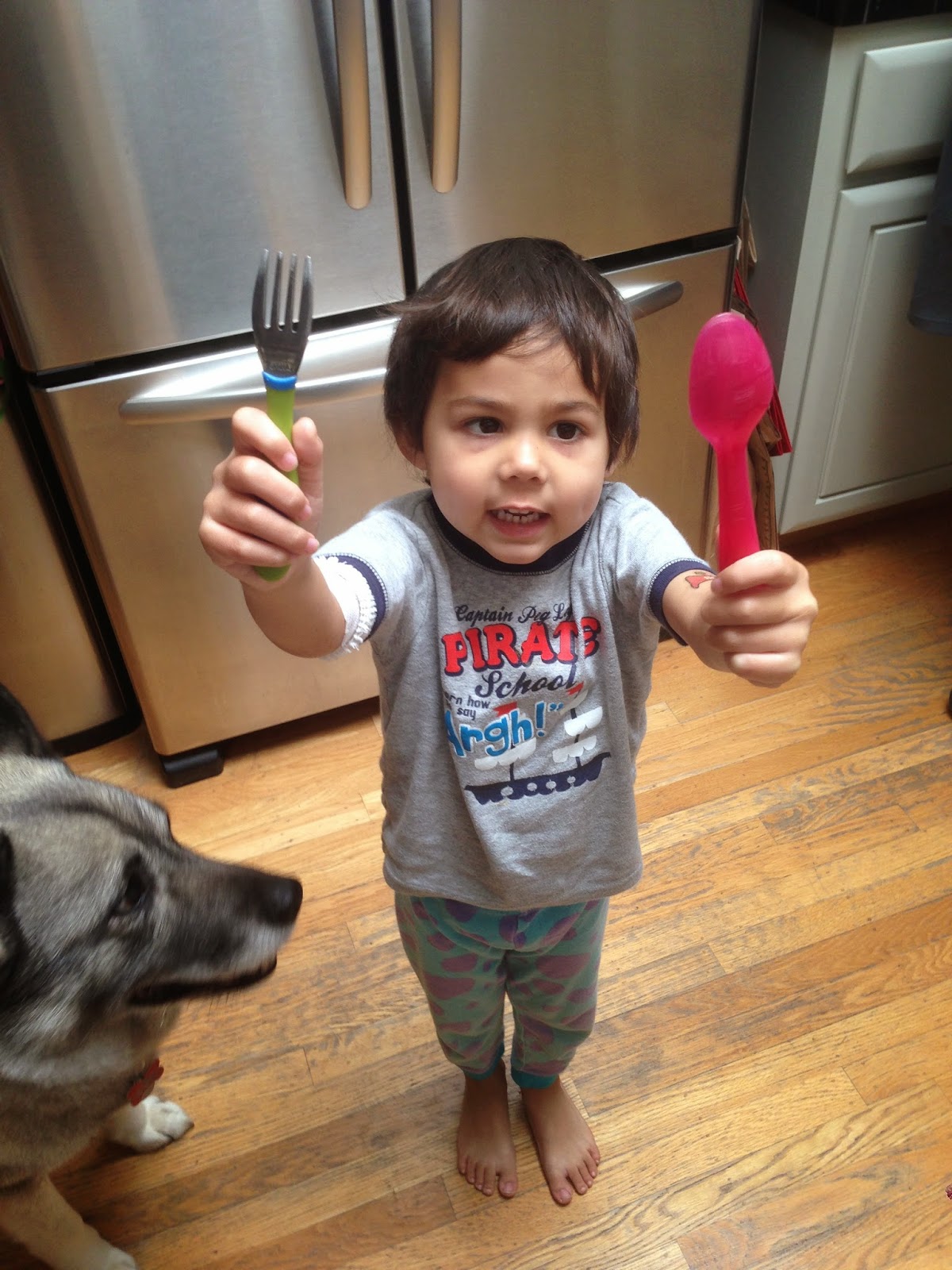 He had a pretty rough morning yesterday - just feeling out of sorts in general.  But by the afternoon, he perked up a bit.  I got ready to go for a walk and Callum loved that idea - hopping up off the couch to join me.  He was pretty perky for the first half block, but I could tell he was starting to lose steam - so I suggested we turn around and go back, which he agreed to. 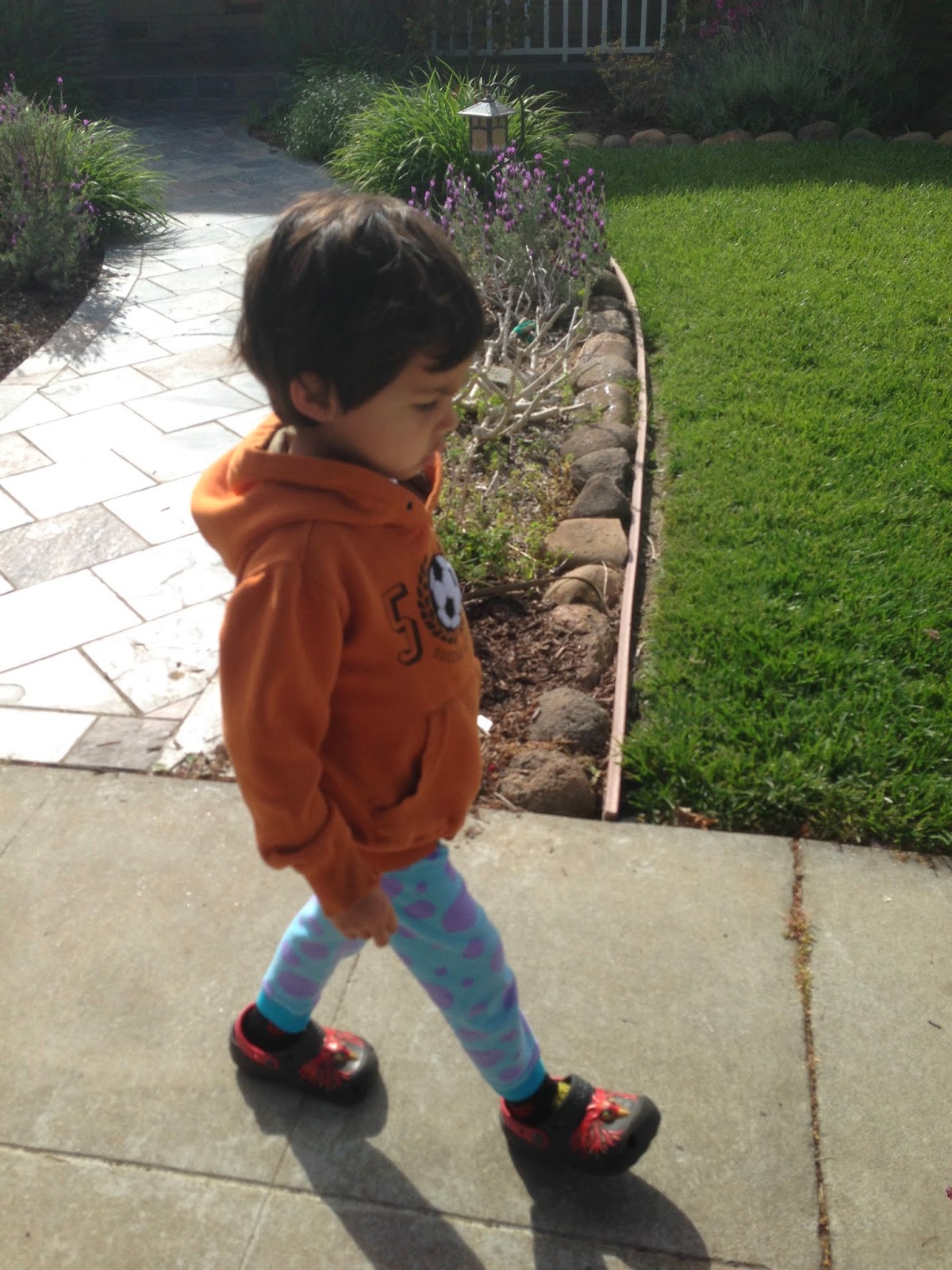 Once we got to the house, I suggested we just sit out on the lawn and enjoy the sun for a bit.  He said no, let's play some soccer! 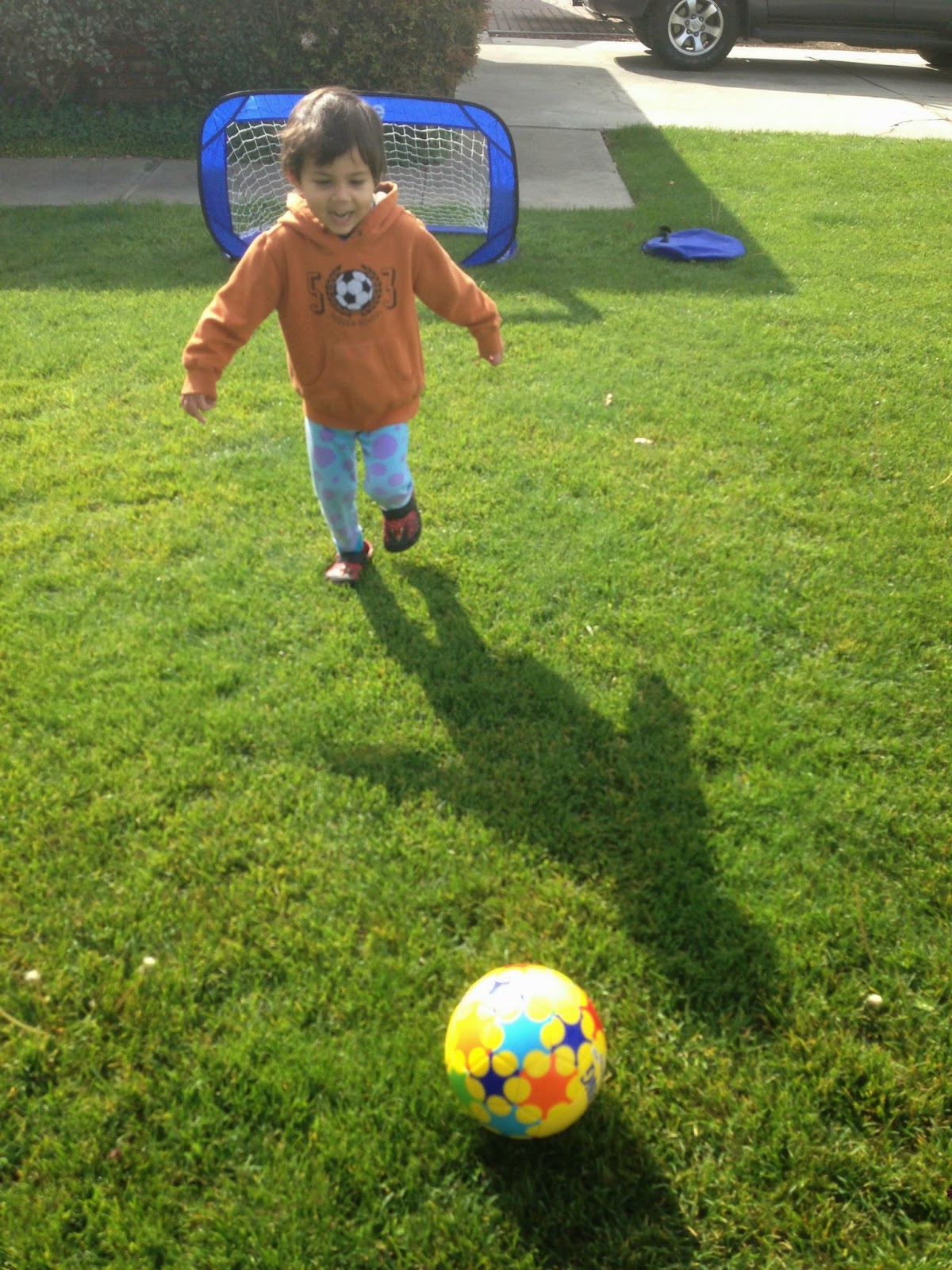 He didn't have to ask my twice.  :) We had a blast and I kept thinking he'd freak out and get pissed off at any minute but he didn't!  He laughed and giggled and ran and jumped for joy.  It was wonderful. 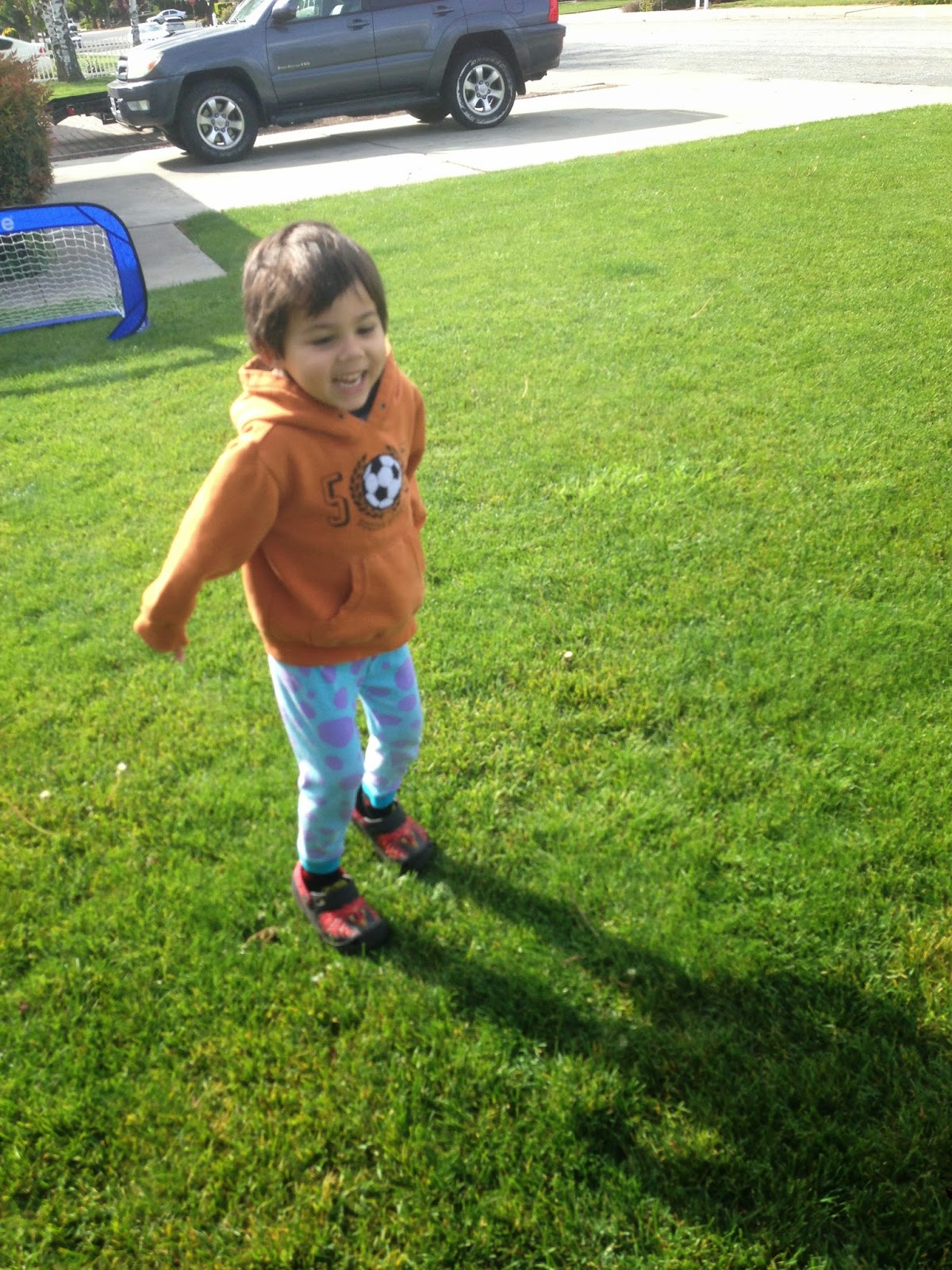 All of that running around (plus one of the meds that makes him drowsy) really tired him out.  He took a nap late in the afternoon and I finally had to wake him up :(  at 8pm!!  Just so I could give him his meds.  That, of course, didn't go well AT. ALL.

But once he was awake, he started demanding food again.  I figured it was fine since it was better to have food in his stomach for his meds anyway.  Unfortunately, I didn't pay as close attention to HOW FAST he was shoveling down the food - so in a matter of about 40 minutes he had who knows how many chicken nuggets and bowls of Mac n' Cheese.  *sigh*

Sadly, this then quickly made him feel a lot worse again.  :(  And, this time, I could see it.  His belly had swollen up super big (the nurses have warned us that a side effect of the steroids is a big appetite which also means a swollen round belly and puffed up cheeks!) and I could tell it was really hurting him.  He was feeling so terrible due to a combination of gas, indigestion and generally bloated uncomfortableness, the poor guy.  So, we finished up the last of his meds quickly, tried to get him to either pass the gas on the toilet or burp him like a little (now big) baby.

This morning we had a similar rough start where he just wasn't feeling great.  He passed out for a few minutes (before Logan and I unfortunately woke him up) on the couch - still holding onto his juice bottle like a drunken old sailer.  ;-) 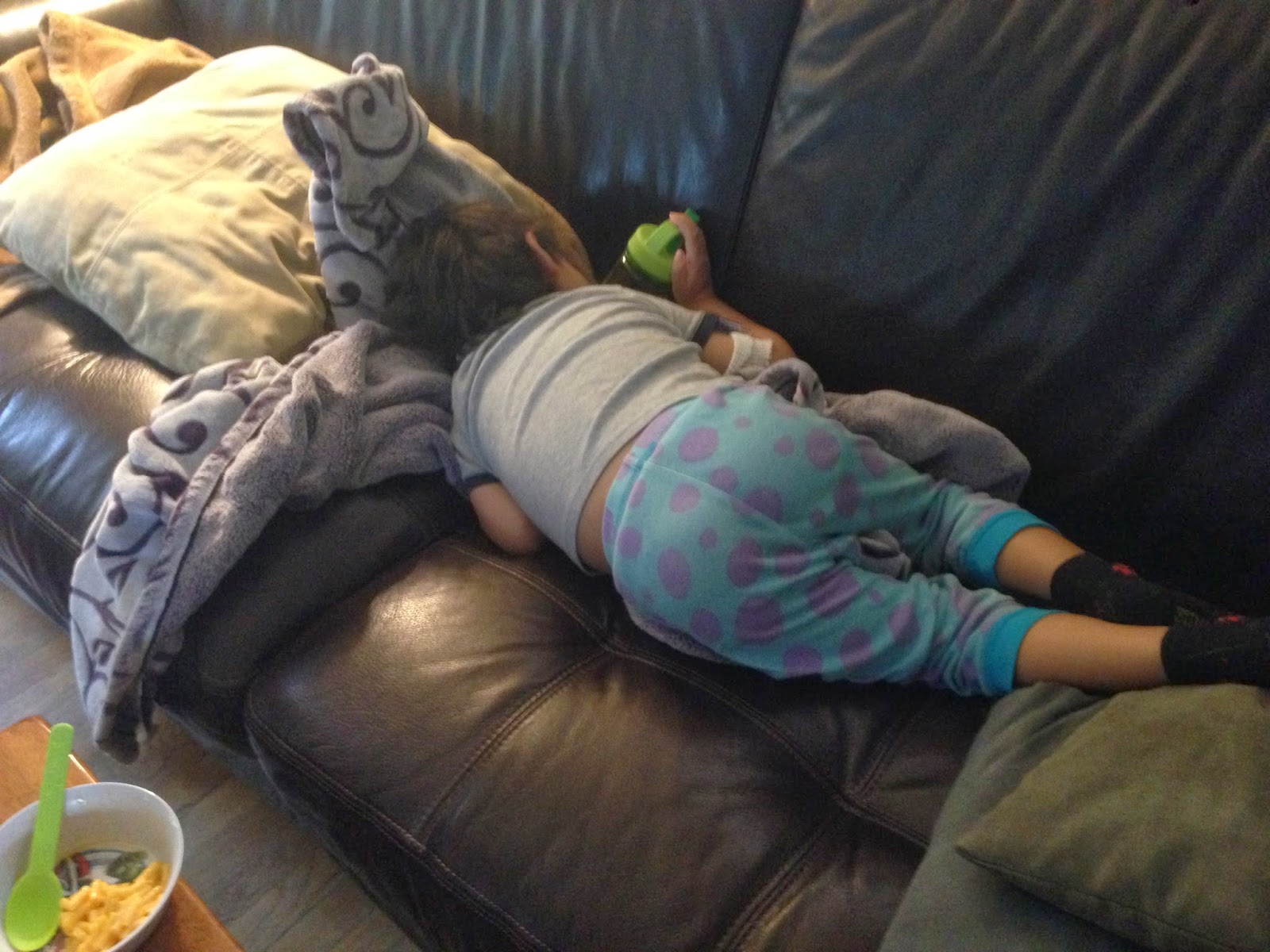 But again, we found our groove and he was in a really great mood for most of the rest of the day.  Here you can see his swollen chipmunk cheeks coming out in full force!!  :) 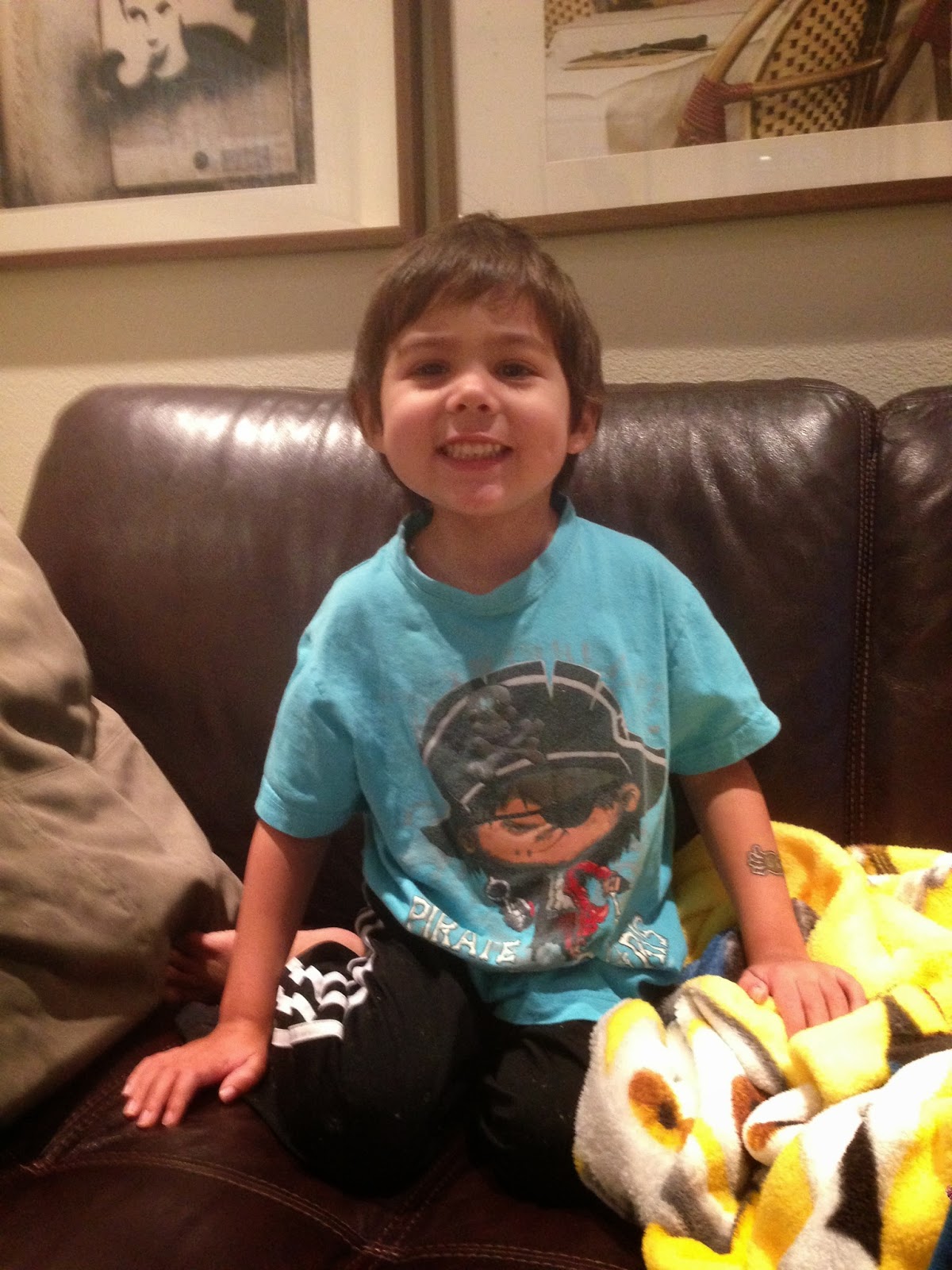 Meanwhile, Mr. Logan and I hung out for the morning before his big day.  The Jodoins had invited him over for a playdate and sleepover today!  He was SO VERY EXCITED.  And couldn't believe he was getting to spend the night.  :)  I hear Robert, and Connor, were both equally excited to spend the day with Logan too! 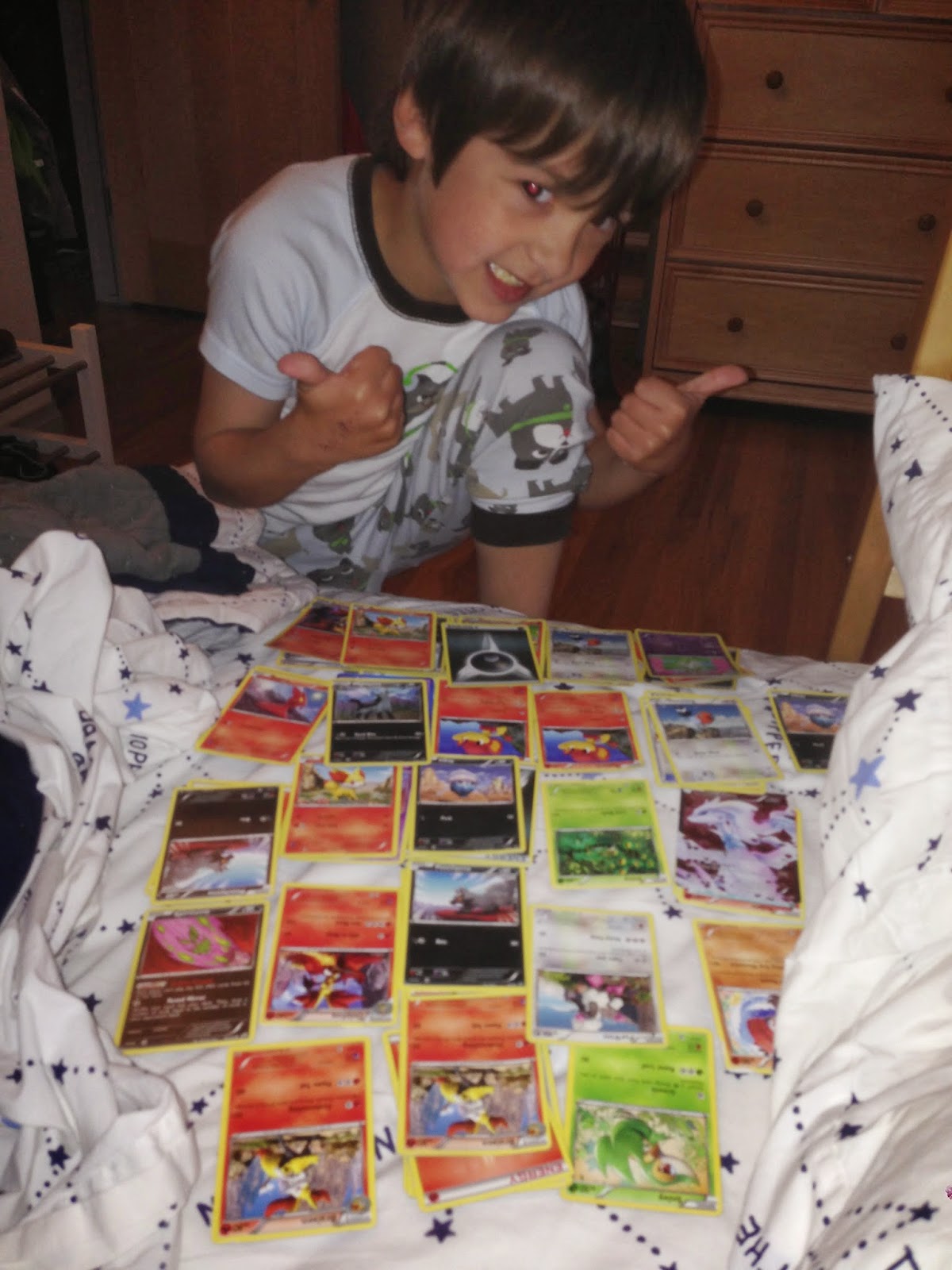 Over the last few months, Logan has become more and more obsessed with Pokeman - watching the TV show, collecting the cards, learning to play the game.  He wanted me to take this picture to show off the collection that he's been stashing away.  He gets a card anytime he earns a special award at school, which he now works very hard to get each day, and which he's very very proud of.  :)
Posted by Mama Bree at 10:14 PM

I love this picture of Logan! I didn't realize Pokemon was still around, and it's fun that he has something to collect and work towards at school. =)

I love seeing Callum play, too! And I look forward to buying one of his Team Callum (F**K CANCER) shirts! Hooray!