A playhouse and slide! 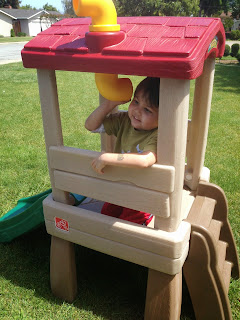 Tuesday, before all the hospital madness started, Callum and I actually went out to a nearby playground - he had a terrific time on the swings but he had a ton of trouble climbing the stairs to the slide, so much that he had to get on his hands and knees and climb up like a baby. :( He was breathless and really upset once he got to the top - so after one slide down he said he was ready to go home. :( I helped him climb up once more for the other slide but he was totally done.

It was such a bummer that his poor legs have lost the strength to carry him up a few stairs - so I decided to hunt on a Mom Swap and Sell group I'm on, to find a cheap little kid playhouse. I thought if I could find a smaller one that was not too intimidating, he could work on climbing it, still get some sliding in (his absolute favorite part of playgrounds) and perhaps we could slowly build back his strength.

I was fortunate enough to find one and arranged to have Jon pick it up while I was at the hospital. So, when we got home last night, it was out in our front yard waiting for us. And today, we got to try it out! Thankfully, he's able to climb it, hang out inside, and totally loves it!! I'm so glad it's going to work out for us. :)
Posted by Mama Bree at 1:30 PM