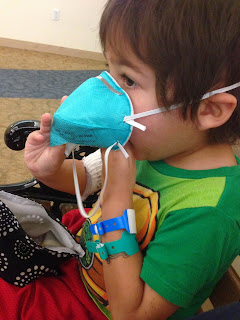 Well, unfortunately, Callum's surgery today was canceled. He has a pretty crappy wet sounding cough that's developed over the weekend. The surgeons were on the fence about whether to proceed or not, but finally decided it would be less risky to just hold off and wait until his cough clears. So, now we're "on-call" about rescheduling his port surgery.

Meanwhile, he now needs a dressing and cap change for his PICC line since that's staying in. So we're waiting while they figure out how to squeeze us into the schedule. And, because Callum's been fasting since last night, he's absolutely starving. So, I'm letting him chow down on some fishy crackers while we wait (which is awkward since he needs to keep his mask on, so we showed him how to "sneak" them into his mouth under his mask, which is what he's doing here....). :)
Posted by Mama Bree at 10:56 AM