Waiting is such a killer 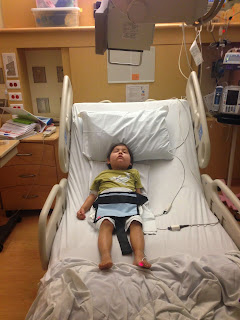 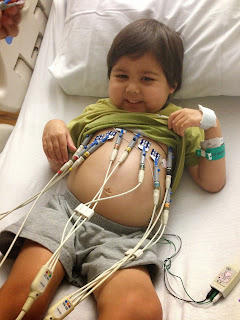 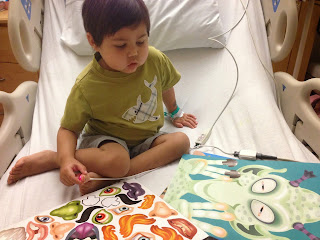 Thought I'd share a few pics from last night, while we sit and wait for test results today.

The first pic is of Callum holding his chin up very still while the tech took an X-ray of his chest. They wanted to see if his PICC line had moved and was touching the wall of his heart, and irritating it. We all thought this was likely the cause of his tachycardia, but it doesn't seem to be from the X-ray. His chest (and lung capacity, which they also looked at since his belly is so distended) all look good.

The second pic was taken while they were hooking him up to an EKG. He was very interested in all of the stickers and probes attached to the stickers, as well as the squiggly lines it drew on the screen during the test. ;-) Results came back normal on the EKG as well (other than having a rapid heart rate).

The last pic is of us waiting for the doctor to come back with the results last night (since, if it were his PICC line disturbing his heart we would've had to pull the line out a bit to fix it). Kim recently got Callum this pack of stickers and faces to put the stickers on. I happened to grab it on my way out the door yesterday when we left in a hurry for the clinic (due to the fever). Thank goodness!! He absolutely loved the activity and it was a nice quiet break from iPad games or movies that I've seen 10 thousand times. ;-) Thank you Kim!!

The doctor also ran another test on his blood last night, to check his liver performance. And his liver enzymes came back slightly elevated. So, first thing this morning (7am), we headed to radiology and they did a thorough ultrasound exam of his abdomen and specifically, liver. I haven't seen the doctors yet to know what the results are from that test.

His fever has subsided (~99 which they don't consider an issue here), and his heart rate slowed a bit overnight, but was still high (especially for resting/sleeping). I'm not exactly sure what the average was throughout the night, but it seemed to be hovering around 130bpm, at least anytime I was awake and took notice. So, they've also ordered an echocardiogram (basically an ultrasound of his heart), but the techs haven't stopped by to do that yet.