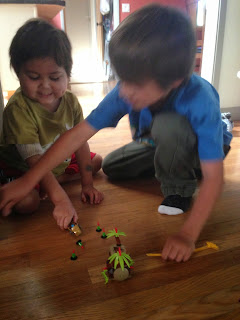 We were discharged earlier today and we are all happy to be home together once more. The minute Logan got home from school, the two of them played together for a good hour, on the floor, like this! Amazing given Callum hasn't really wanted to do a lot of playing or sit on the floor (or get up from the couch unless we force him) throughout the entire Induction phase. So this was super cool to see, for so many reasons. :)

Callum's liver seems to be improving, since his blood work came back better today. His heart rate is still high, but clocking in about 10bpm slower, on average, than yesterday (purely from my observation). The only thing that was a tad scary (for me) was that he seemed to develop a cough overnight. But the doctors took a listen and examined him and decided it wasn't anything too critical - and most of the cough went away after I got some fluids in him in the morning.

The medical team decided he was stable enough to go home. They're pretty sure his elevated heart rate can be contributed to a viral infection that he's probably been fighting. And with those, there's not much to do but watch and wait till it passes - making sure he's getting lots of rest and fluids in the meantime. (The blood cultures aren't all back but so far they're all negative, so the team is pretty sure it's nothing bacteria related but viral instead).

They think the inflamed liver is due to his chemo, and since it's still functioning fine, producing proteins etc, and the numbers improved today from Tuesday, they're feeling better about it. In fact, they feel it may have just been coincidence that we even caught it at all - since it would've gone unnoticed had we not come in for the fever. :)

We also discussed what to do with his PICC line. The team decided it would be best to leave it in (since he's getting his port in on Monday) - but there was some debate amongst the team on this actually. The resident and fellow (remember, this is a teaching hospital), wanted to leave it in and not disrupt anything. The attending thought we should yank it out, since it was just extra hardware in his body that could cause issues. So I asked him why he was allowing the team to keep it in - and he said he didn't feel strongly about it one way or another. The younger doctors felt we'd jinx ourselves with the approach of "pull it out since we don't need any more labs before the port is put in anyway" :) And finally, I think the attending allowed it because we're only talking about a few more days, and he's allowing these guys to learn to make calls on their own.

What all this means, by the way, is they every visit for us will be nerve wracking, since the residents and fellows want to run a million tests to rule out every possible scenario. Meanwhile the attendings, like our own oncologist, are older and a bit jaded - and pat me on the back saying don't worry, this is all due to the meds, he's fine. (This happened by the way, while Callum was screaming during his echocardiogram and I looked at him and said, THEN WHY ARE WE DOING THIS ECHO.... To which he just said yeah, they're just being careful and thorough). LOL!! Anyway, it's good for us to think about next time around, to help keep our own nerves in check sometimes. :)

While Callum's blood counts have improved, they do still want us to be watchful over the weekend since he has surgery on Monday (and none of us want to miss it and reschedule). Sadly, this means I may have to change our plans for the weekend - I was hoping to take him out for a couple of things to celebrate his birthday (on Saturday). They've said we can still do a few things, we just also need to watch how he's doing too and cancel if he's showing more wear and tear. :/

The one thing I've noticed while we were in the hospital, has been a gradual shift in his attitude and appetite. It's very gradual - but he's more and more, in a better mood, with less and less mood swings. Today, I can't tell you how many times I've found him giggling and laughing and generally in a great mood. WHO WAS THIS GUY?! This has been unheard of over the last few weeks - so much so, it feels a little weird to have our giggly guy back!! :)

Likewise, he's not nearly as ravenous about food!!! It's so cool. He's still asking for food, but I've noticed he's eating less when he does eat, and eating less frequently overall. This also started mostly today. And tonight, when we got home, I asked the boys if they'd like a PB&J for dinner - to which Callum said, not now Mommy. I'm not hungry and my tummy is full.

Music to my ears, man.

It's awesome you can still see his dimples in his chubby cheeks. Love that he is home again.