Our days are passing by without much event, which is great.

The mornings are best for all, but as the day wears on, Callum gets more and more uncomfortable.  And by the evening, he's feeling pretty miserable about his huge belly - filled with gas, pressing on his diaphragm, and hurting like hell (I can only imagine).

But, before I talk about the bad, let's see the good!  He's not only obsessed with his food, he's obsessed with helping you make it, and is becoming quite the handy - if not passionate - little chef in the kitchen.  ;-) 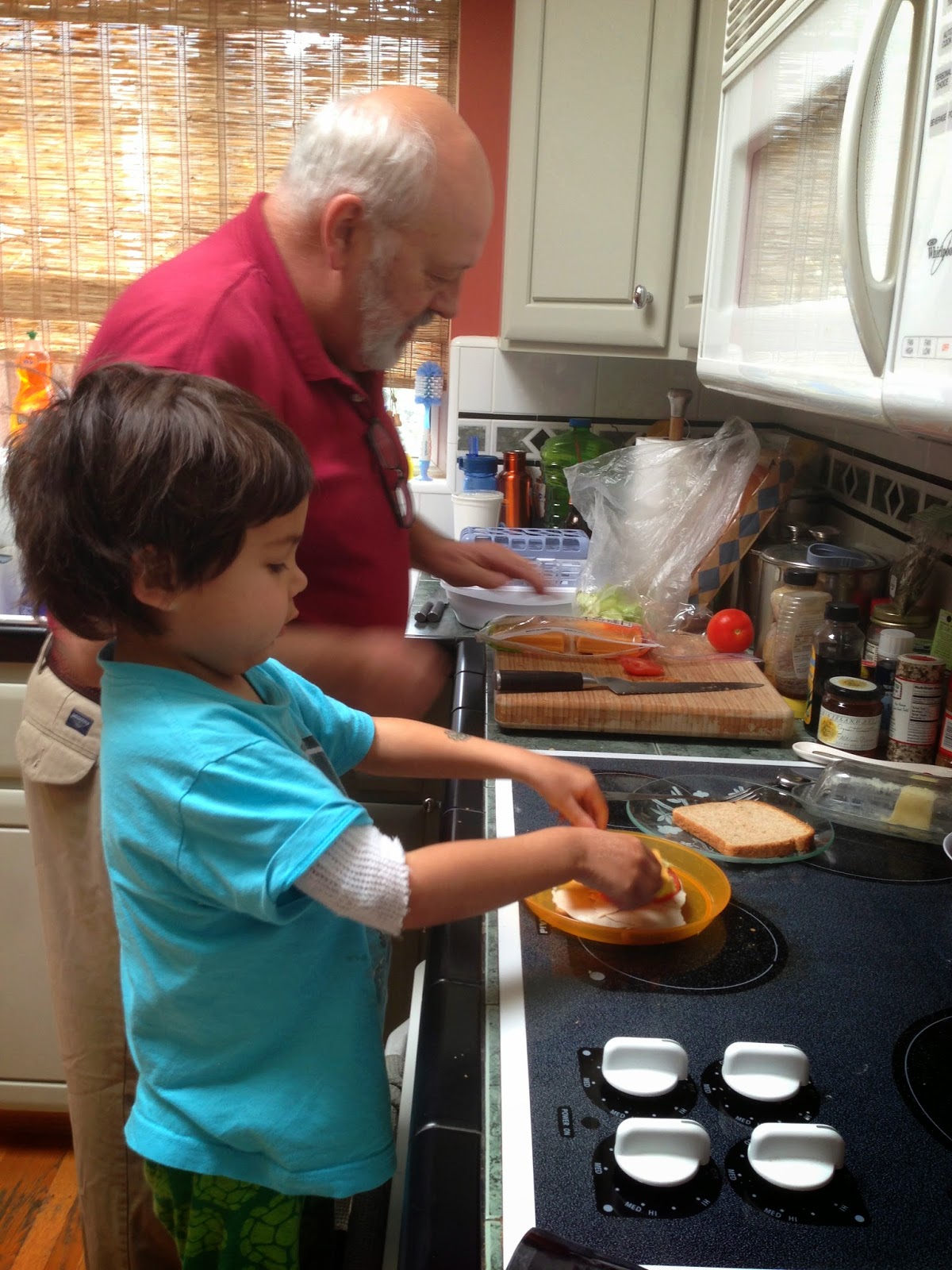 Our weather has been a big strange these last couple of days - raining on and off most of the day.  In between the spurts of rain, I've kept trying to convince Callum to go outside with me.  I figure the exercise (whether walking, running, biking) could help get some of the gas to pass and ease his pain.

(I've also been a tiny bit worried about muscle atrophy, due to his sudden sedentary lifestyle.)

Uncle Zane came over to visit for a bit, so I used that as an excuse to finally force us outside.  We got Callum to bike down to the end of the street and back - it wasn't much but I'll take it!  Progress! 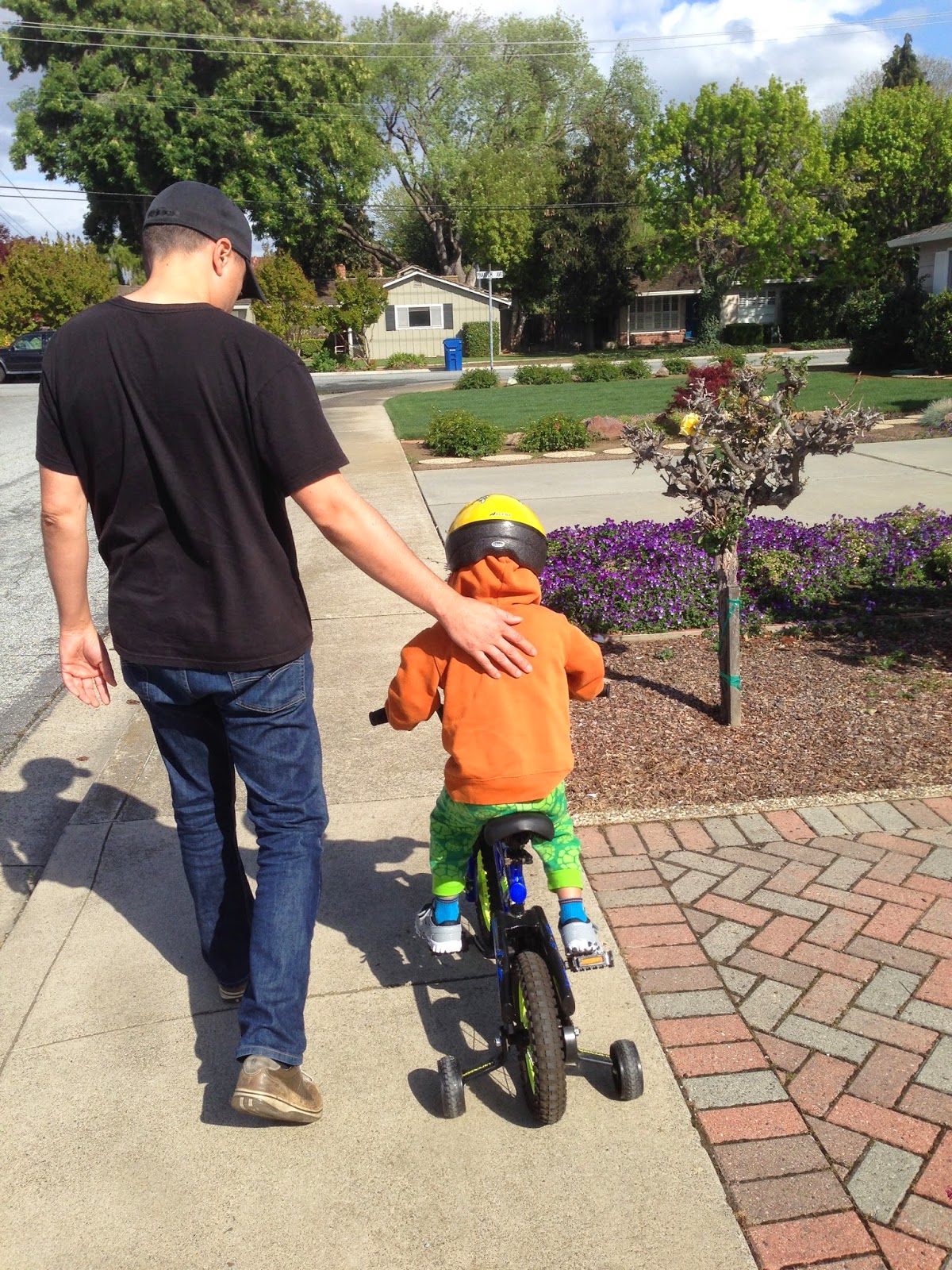 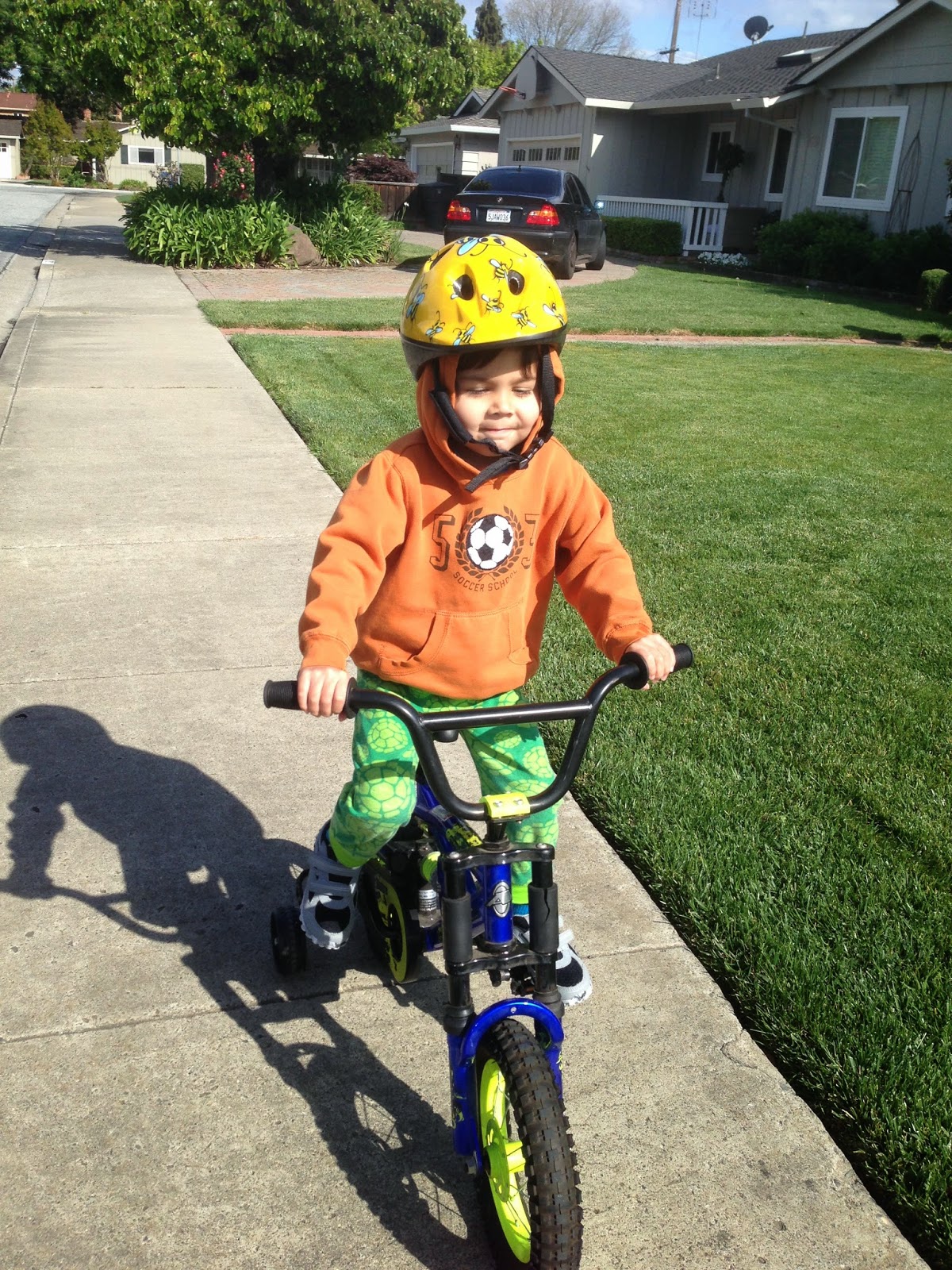 He was pretty worn out after our little jaunt, but I was so tired of all the iPad games and movies playing all day long that I suggested Uncle Zane read him a few books before dinner time.  Another success!

Uncle Zane is quite the story teller - here, he's reading Callum the grand story of the Pirate Cruncher, starring "Captain Callum-Beard" (Zane changed up the name of the pirate, which Callum JUST LOVED).  :) 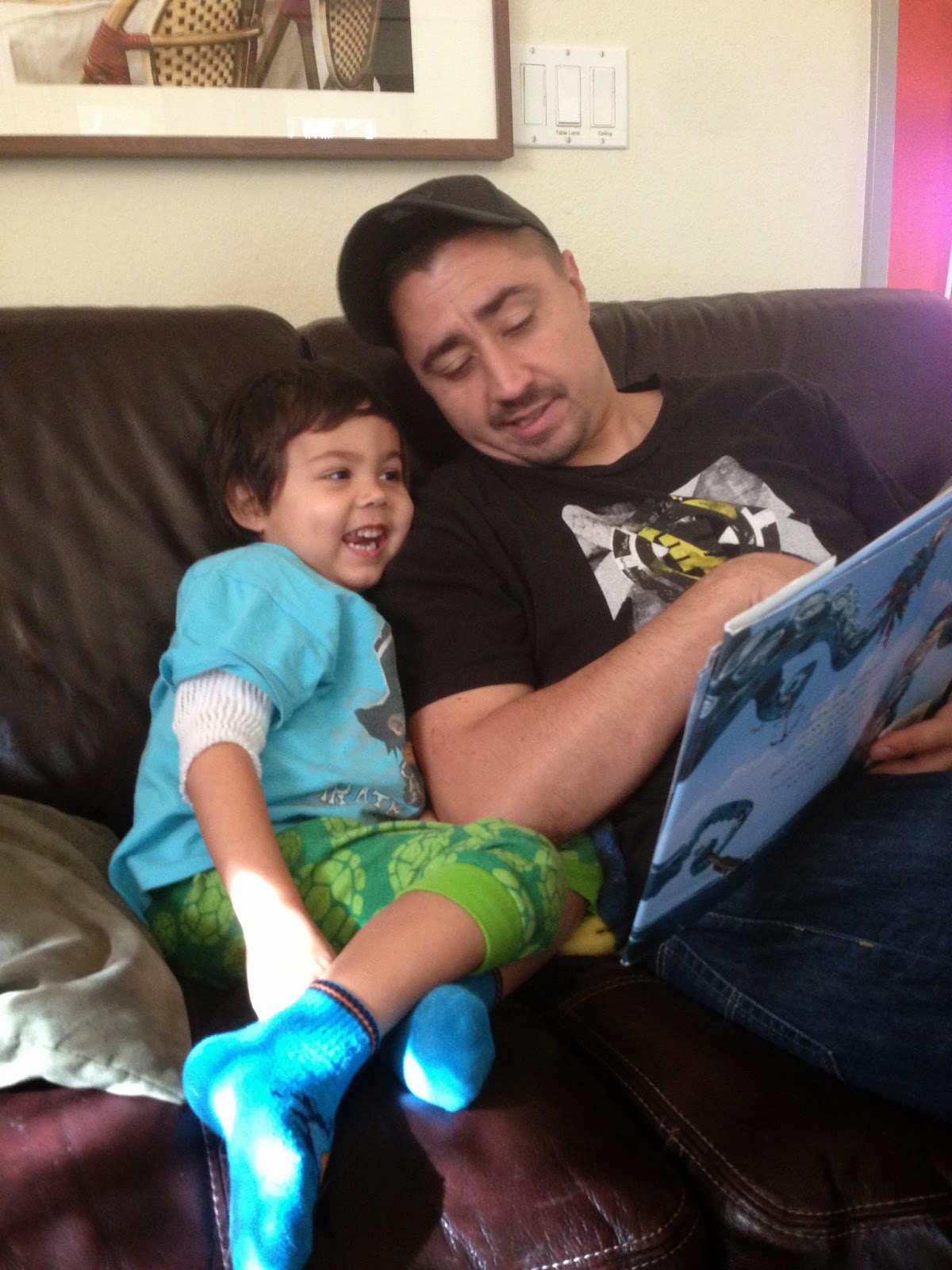 By dinner time, Callum was losing some steam - but because his Uncle was visiting, he lasted a little longer than usual.  Zane picked up some Chinese/Burmese take-out for dinner and I was able to get (both) boys to eat a bit of variety (and vegetables) for once.  Yes!

But, shortly after dinner, Callum started to feel more and more miserable (his belly was EXTREMELY distended, as it usually is, by the evening).  I had lost track of time myself and realized I needed to work on giving him his evening meds, which irritated him even more unfortunately.  :(

It was clear he was in a fair amount of pain and just plain uncomfortable.  I asked him if he'd be willing to sit on the toilet and try going potty before bedtime - and amazingly, he agreed.  But, shortly after he sat on the toilet he got agitated and decided he wanted off.  I begged him to just relax and stay awhile - hoping he'd relax enough to pass some gas.

He claimed he was just really tired and wanted to go to bed - that his belly would feel better once he laid down (which is true, he feels better after he goes to sleep, I suspect because he finally relaxes...).  I told him to just close his eyes and rest on me for a bit - and there we sat, with him leaning on my arm/lap, while he sat on the toilet, for about 20 minutes, before I decided to finally move him to bed. 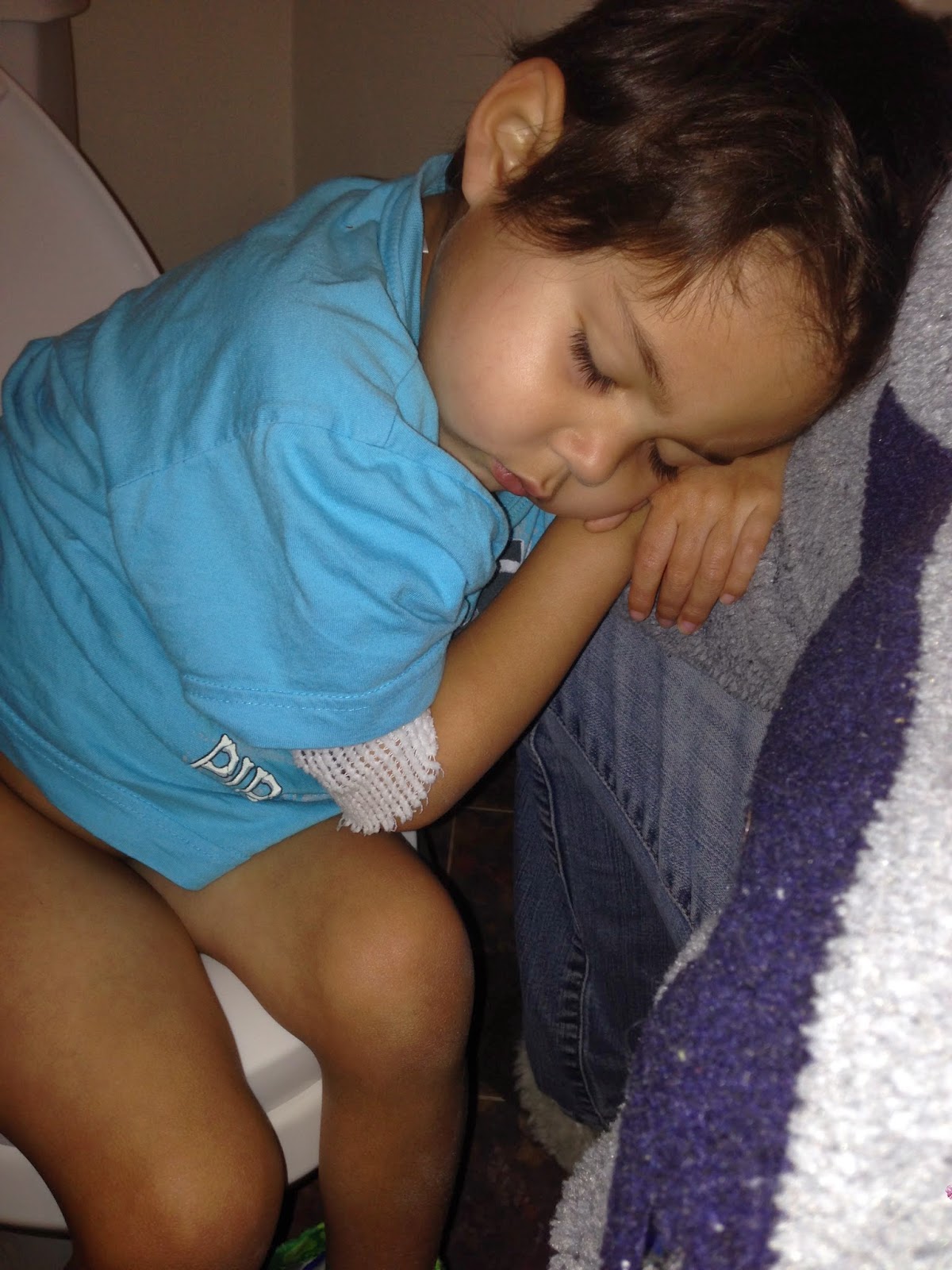 Poor little guy.  I don't know what more we can do for him but just continue to ease his pain as much as we can, little by little, day by day.
Posted by Mama Bree at 10:02 PM

would sparkling water help him burp it out?