Yesterday was a long and exhausting day at the hospital, since we had to be there early for his surgery. We went all the way into pre-op, changed Callum into his surgery dressing gown, wiped him down with these special wipes to prep his skin, before the herd of surgeons crowded our area to debate whether we should actually do the surgery or not (and then decided against it, after I asked them to talk to our oncologist and make sure he was okay with canceling - he gave the final approval to delay the surgery - so there we were).

But, because he still had his PICC line in, it then meant we had to get his dressing and cap changes done, and I had thought we also needed to get labs drawn (but I was wrong).  Because all of that wasn't planned, and the clinic is (always) crazy busy, we had to sit for another hour or so waiting for our turn to sneak in.  And because we had to wait for the opening, I couldn't sneak us away for lunch or a bite to eat - which was really unfortunate since Callum was STARVING.  :(   I had a number of snacks in my backpack that I always carry with me, so it helped to tide him over but it really wasn't enough.

When we were finally taken in, we then had some further delays regarding the dressing change, because I questioned the nurse about whether we should also pull his line out a bit (due to last week's debate on whether the line was tickling his heart or not).  I had also discussed this with the head surgeon down in surgery who said the PICC team could address it for us (she agreed with the doctors from last week, after looking at his X-ray and Echo, and didn't think it was needed, but also said it wouldn't hurt anything to pull it out a half centimeter or so, just in case).  Consulting with the PICC team meant a longer wait time, since we needed them to review Callum's case.

Part of me wished I had kept my big fat mouth shut since the consultation would further delay a visit to the cafeteria for poor Callum, but the other part of me knew I had to ask - because if I hadn't, I would still be wondering if it was something we should have done.  ;-)

Finally, after reviewing his case, the team decided against messing with the line.  So, we proceeded with the dressing change - which was again traumatic, and tough for both of us, as always.  :(

After that, we then met with (our regular/assigned) Nurse Carly to go over the next phase of treatment, answer any questions I might have, discuss his next set of meds, and allow her time to examine Callum (and question me regarding the cough, etc.).  When we finally left, we THEN headed to the pharmacy to pick up his next set of meds, and FINALLY, at about 1:30pm, we made it to the cafeteria.

Callum was craving a hot dog - so we went straight to the grill and ordered him one.  He was pretty cranky and hungry (can you blame him?!) and impatient while the poor cook grilled his food.  When it was done and he handed us our food, Callum saw his hot dog, sliced down the middle, and just lost it.

I mean, full on melt down; despair and heart break and all.  He just let it rip.  Sobbing in the middle of that damn hospital cafeteria.  :(

So, there I was.  With a tray full of just cooked food, a bursting backpack tipping me over, and a sobbing kid who demanded to be carried, while insisting the hot dog on our tray wasn't his because it was cut and he didn't want his cut.

I fumbled to pay for our food - sat us down - and spent the next 15 minutes trying to calm my poor mask wearing kid down.  ALL EYES WERE ON US.  (yet not one damn person offered a hand, btw!! Grrr)  He was just flat out exhausted, and hungry, and honestly we should've just gone straight home but he was so damn hungry I thought getting food in him first before the long drive home would've been better.  UGH.

I somehow managed to "fix" our predicament - basically by insisting he take a couple of bites, and once he did and his hunger took over, he forgot about how upset he was and proceeded to inhale his entire (big ass) hot dog.

Here's a pic of him in a much better mood, calmed down and finishing up his last bites before we headed home.  As you can probably imagine, he passed out immediately once we got into the car - so I hit a Starbucks drive thru and got gas to prolong his nap a bit more before finally getting home... 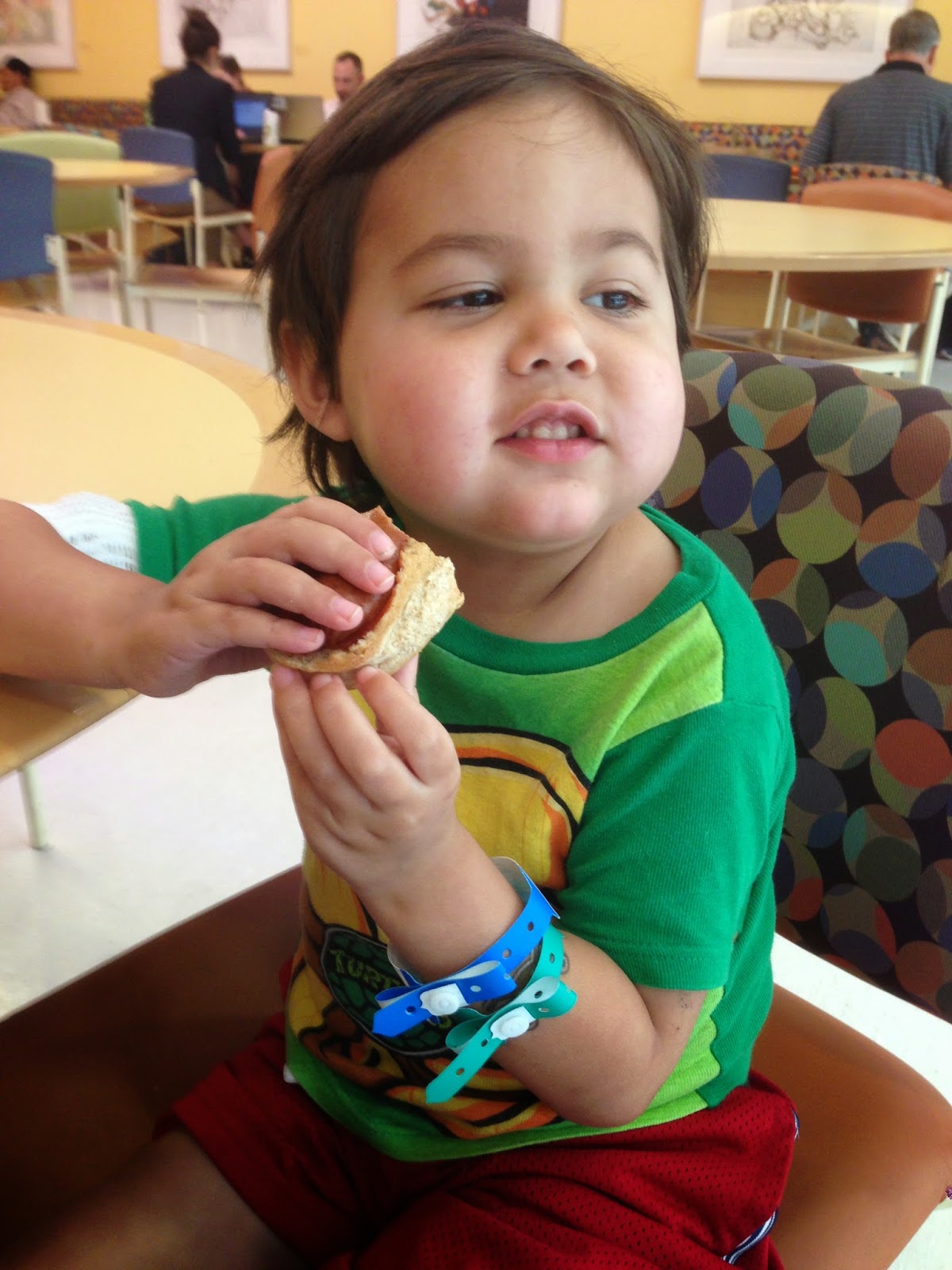 Yesterday was also our first day of the next phase of treatment, called Consolidation.  It's much longer than Induction was, but less intense (supposedly).  Here's the schedule I've put together - for those interested :)  We'll wrap up Consolidation by the end of August.  After Consolidation ends, we'll enter the Maintenance phase - which will last until September 13, 2016 - our magical end date (at least for now)!!  :) 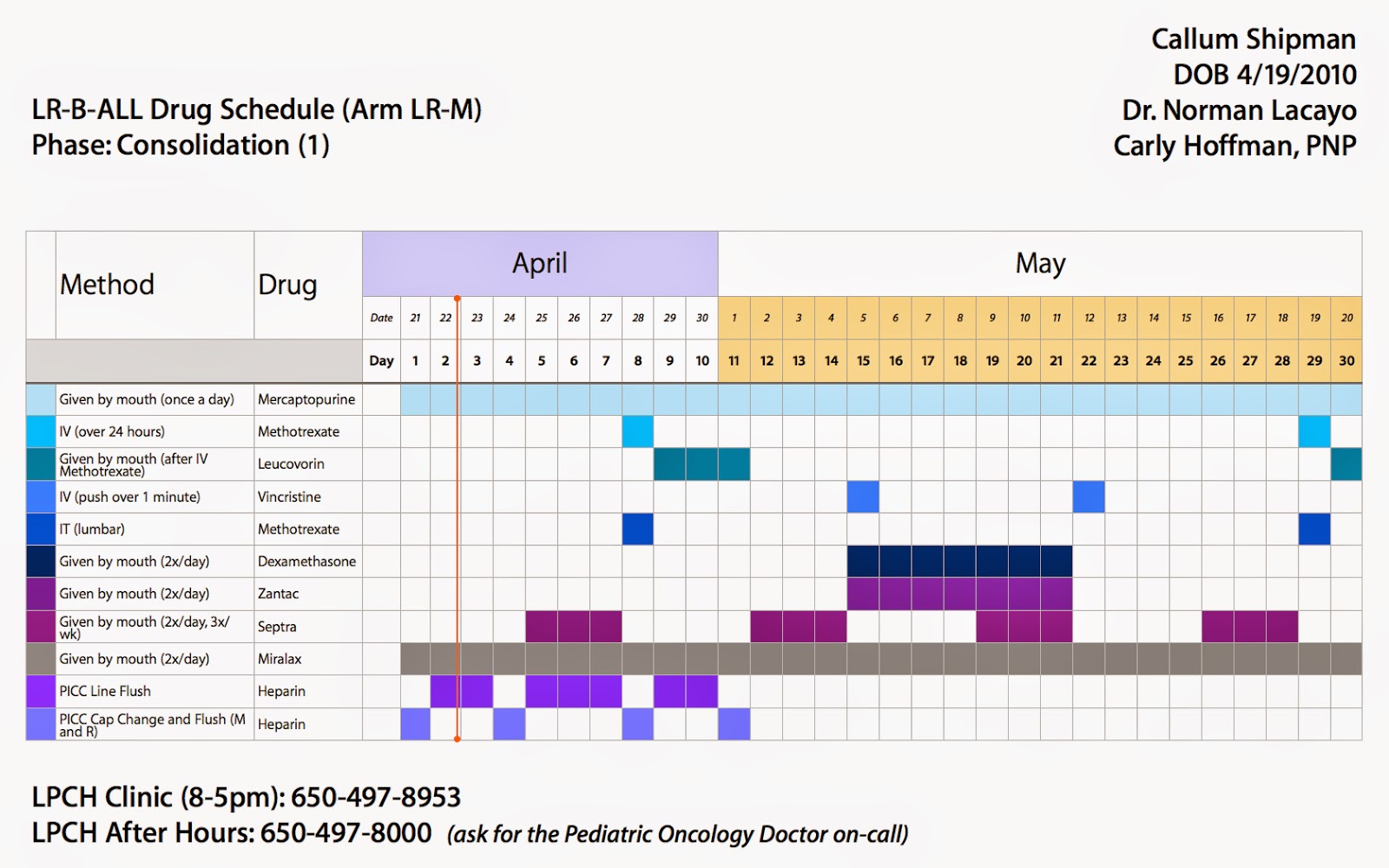 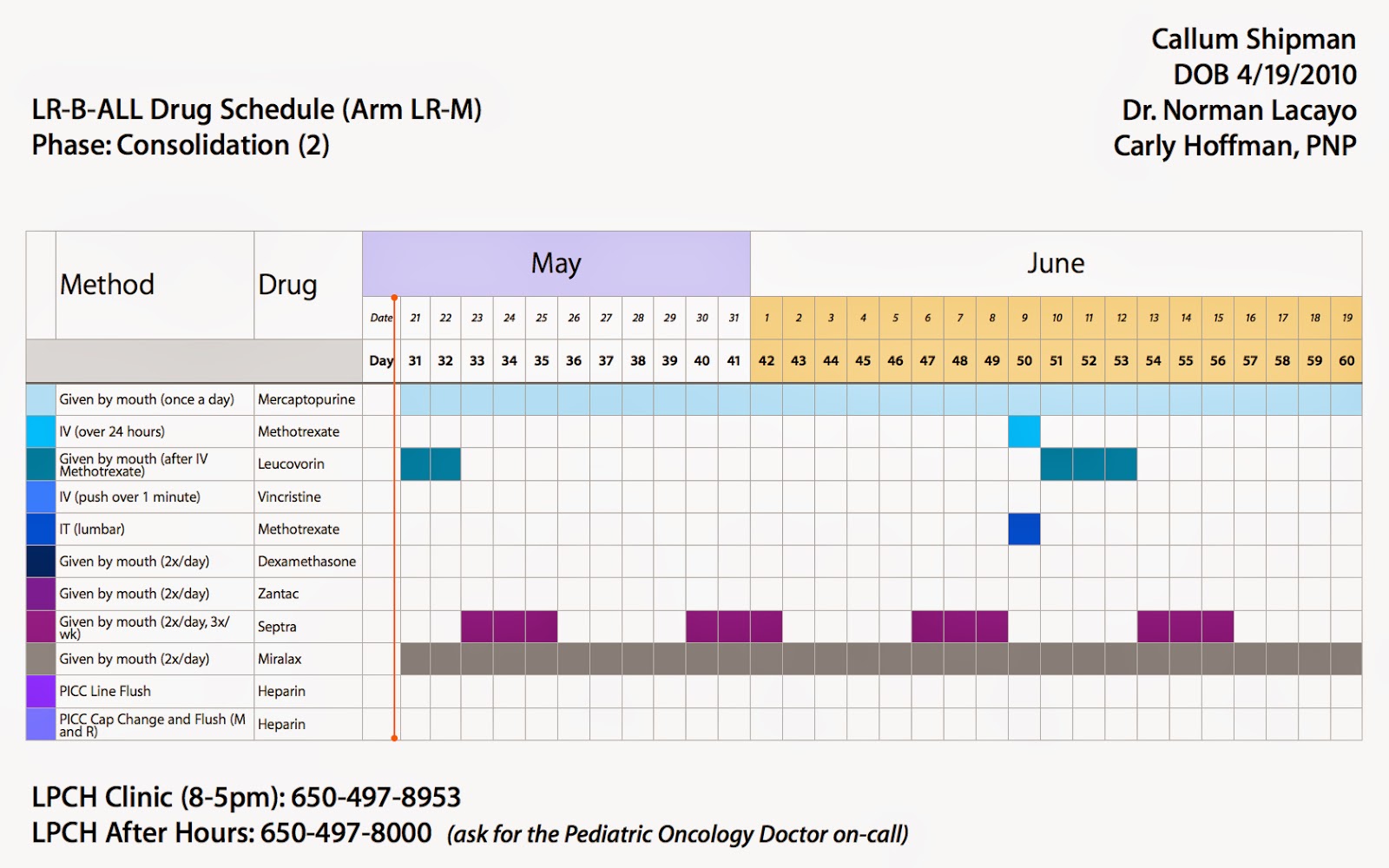 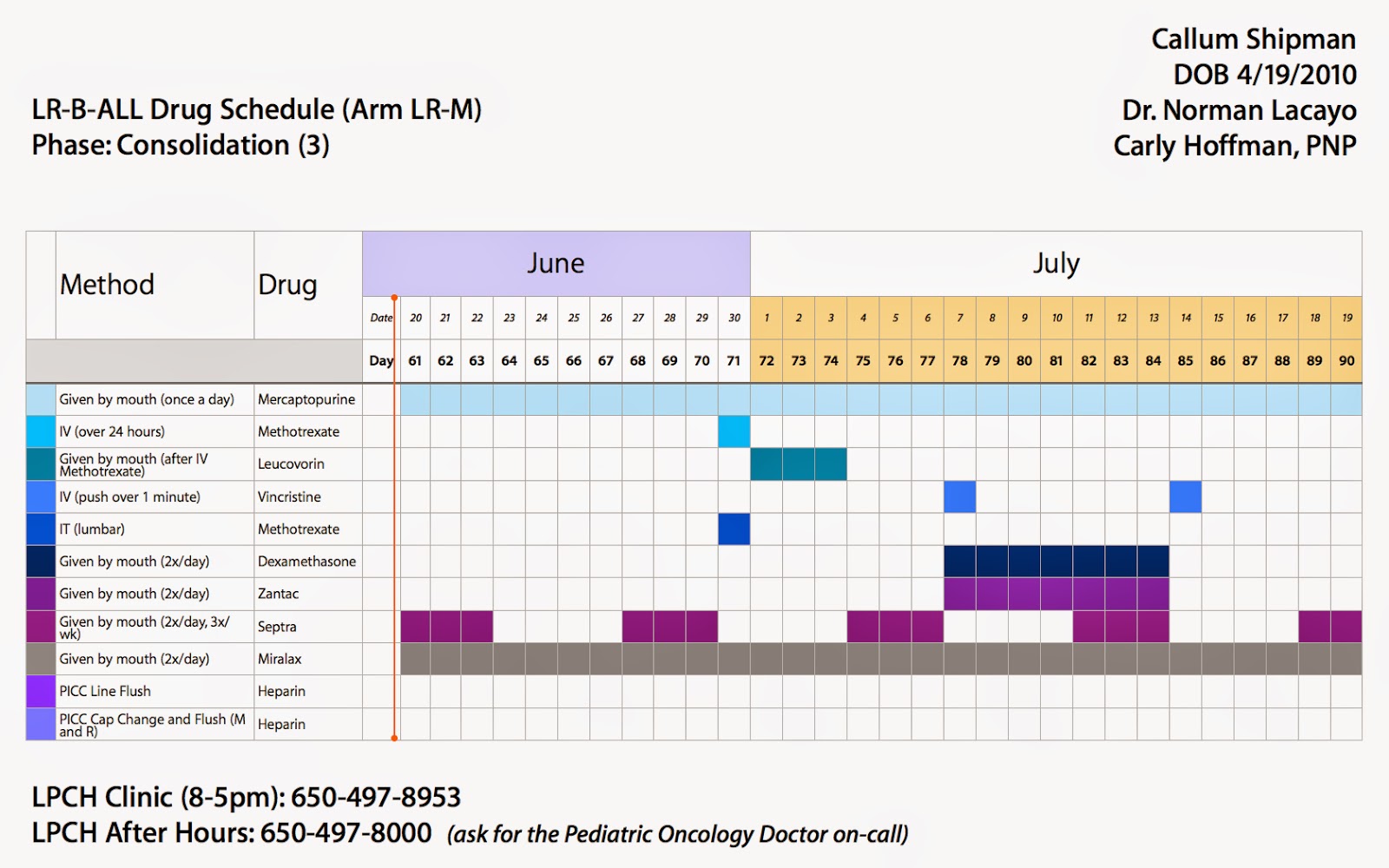 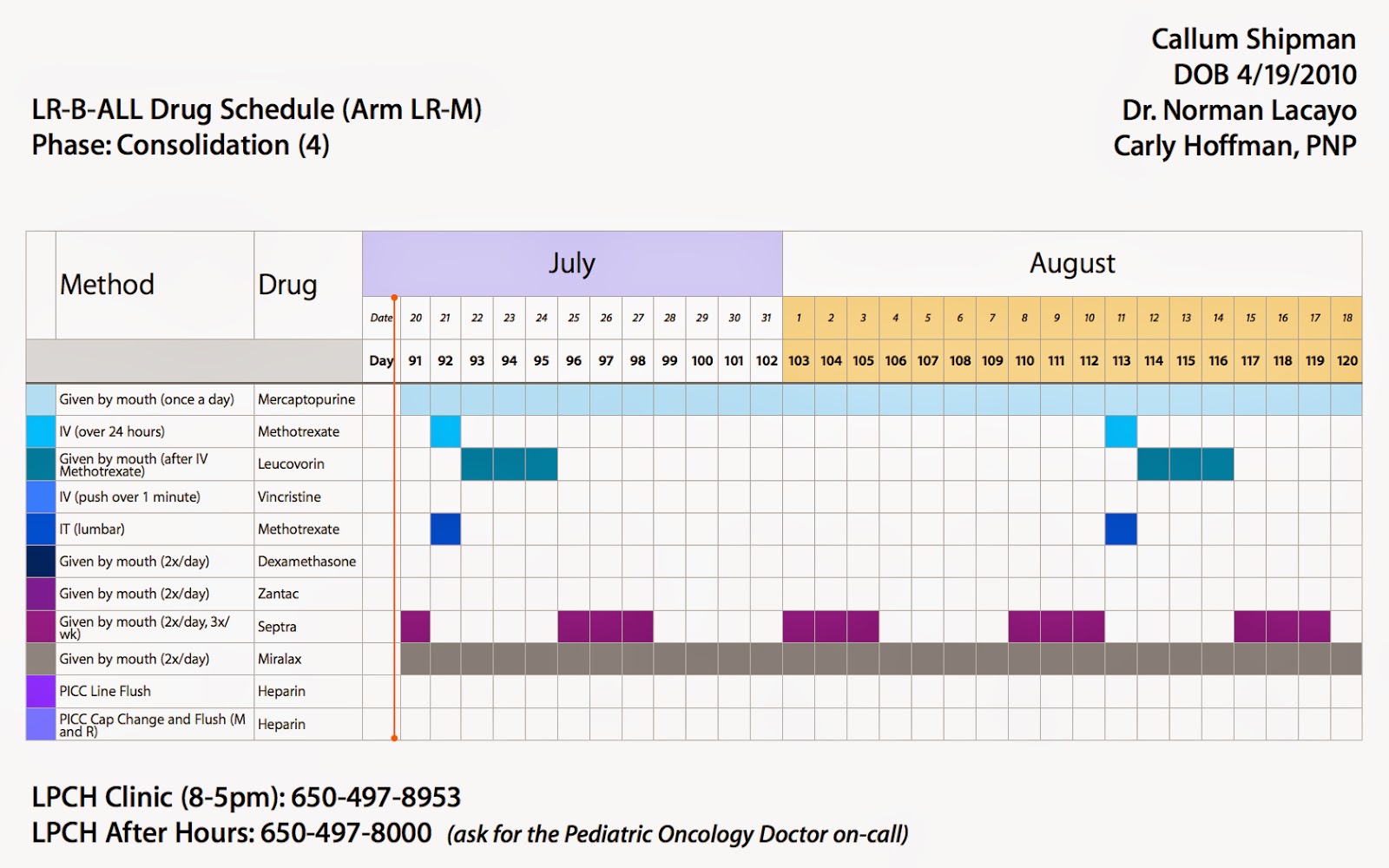 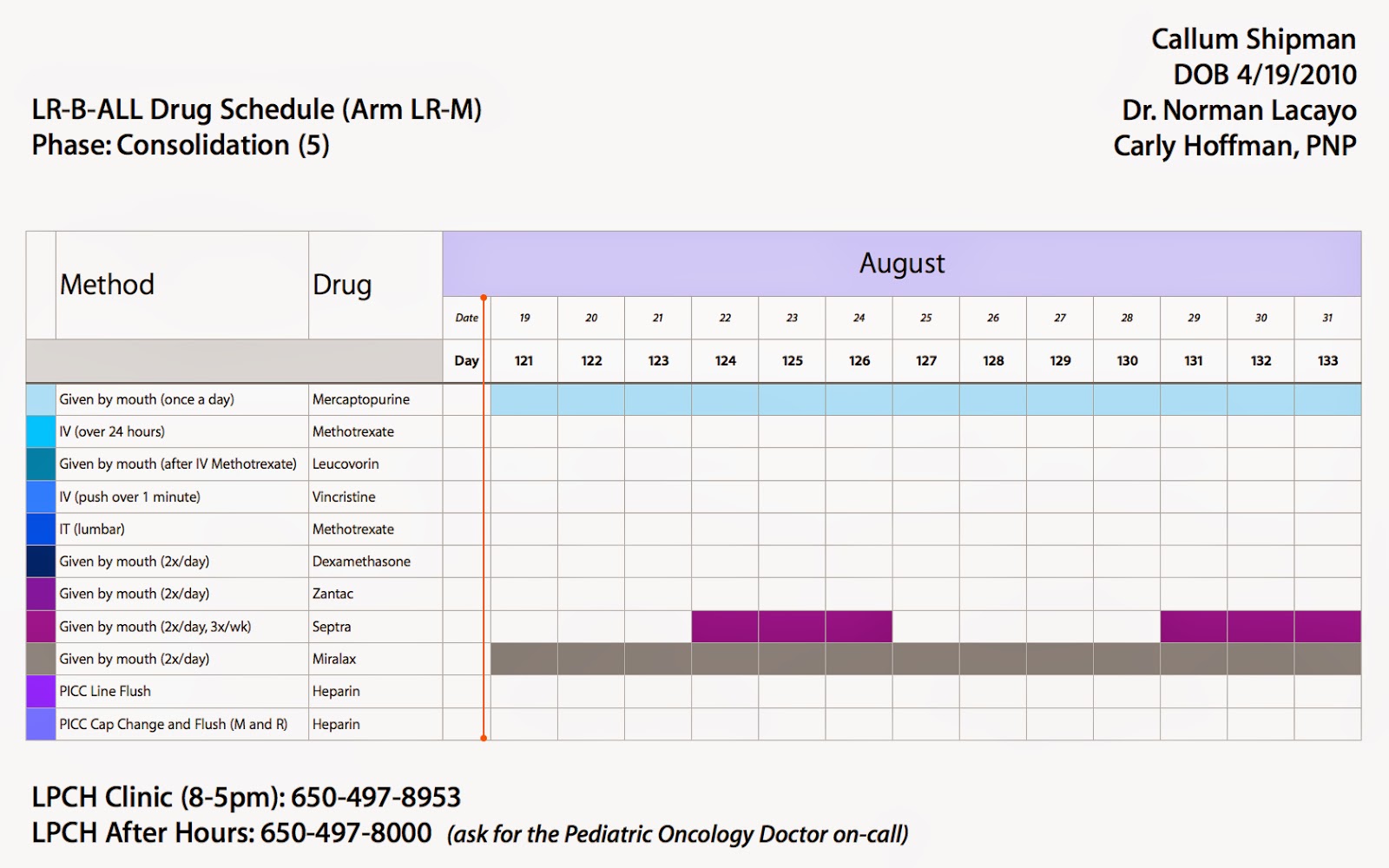 The thing about Consolidation, from what I can tell, is that it's all about timing.  We know we'll have (at least) 6 hospital admissions to tackle.  These are the sections where Callum will receive Methotrexate via *both* IT (a lumbar puncture) and IV.  The IV will be administered over a 24 hour period, and then we'll have another chemo drug, Leucovorin, to provide at very specific hour intervals after the IV begins, over a few days.

Because of this, we'll have to stay at the hospital for ~3-4 days after we begin the IV.  It's pretty intense and a very high dose of chemo to Callum's system, so we actually don't get approved to go through it, until a couple of days before each scheduled dose, since his blood counts have to be high enough to handle the chemo (if they are too low, we wait until his counts recover and are high enough to take the slug of chemo).  So, while I can "sorta" plan our lives around these admissions, I also sorta can't.  A bit frustrating for the planner in me, but I'm trying to just go with it.  ;-)

The other main part of Consolidation, which we started last night, was his nightly dose of Mercaptopurine (also called 6-MP).  This one is ALSO all about timing - since he has to have it at night, just before bedtime, and on an empty stomach.  Which means, I had to get Callum to eat dinner by a specific timeframe, and explain to him that he wouldn't be getting any more food or snacks or drinks for the rest of the night.

Try explaining that to any 4 year old on the street!!  It was tough, but I'm hoping we can establish a routine that will help him understand this is his new life (and ours).

This drug is actually in tablet form (and just to complicate things more, I'm supposed to give him half a tablet 4 days a week, and a full tablet the other 3 days a week - ugh!!), and Callum has never taken pills before, so I wasn't sure how it was going to go last night.

He's allowed to chew them and when I gave it to him, he immediately chewed it without too much complaint.  He's allowed to take it with water (phew!) but that's all - no juice, nor food, nor anything else for the rest of the night.  Talk about a tad stressful, man.  Thankfully, we have a champ who's actually pretty good natured about most of this stuff and takes it in stride.  :)
Posted by Mama Bree at 9:47 AM