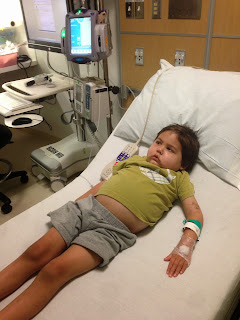 Just when I was patting us on the back for getting through induction without spiking a fever or getting admitted to the hospital, Callum hit a fever this afternoon. :(

It wasn't super severe, but it did spike to 101 at one point which is cause for coming in. After talking it through with the clinic nurse, we decided we could skip an ER visit and drive to the clinic instead.

Now that we're here - they're pumping him full of fluids and running a battery of tests. His fever is consistently sitting at about 100 right now (even after some Tylenol) and his heart rate is pretty high (~160), which means it's working harder right now due to the fever.

They've drawn two blood cultures from his two lumens on his PICC line (they draw from both to make sure there's not an infection in one of the lines). They've also drawn another blood sample with an actual poke (still not fun). I can't remember why they do this but let's just chalk it up to them being extra thorough.

The blood work will tell us things like what his counts are, whether he's neutropenic again or not, and whether there's an infection present or not. We also did a urine sample (which will also look for an infection).