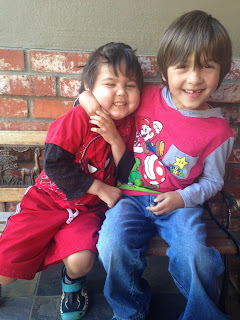 We've had a pretty low keyed day of course, but that didn't stop us from getting out to an early morning movie since we got the all clear from Callum's doctor! Neither boy actually wanted to go out, but had a fantastic time once we were at the theaters, and kept talking about their favorite parts of the movie (Rio 2) after. :)

Callum's actually been a bit out of sorts today. His legs are super sore from the all-day egg hunting marathon we did yesterday, which had been upsetting for him since he can hardly walk on his own. :( I knew we were probably over doing it but he was having so much fun, and it was so nice seeing him run around like a little kid again, that I didn't stop him. Oh well. Hopefully he'll feel a little better tomorrow for Easter. :)

My brother, parents and grandmother all stopped by in the afternoon for cake and presents. He was against eating any cake (even though he requested we get him chocolate cake for his birthday), and was even against opening presents at first, but warmed up after the first one, to open all of them in the end.

We absolutely love you dearly Mr. C! We hope you've had a fantastic day - and an even better rest of the year. :)
Posted by Mama Bree at 5:39 PM