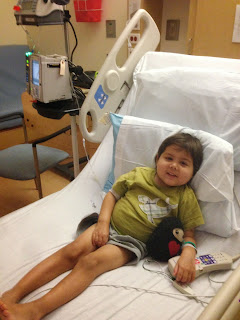 So we're staying another night. *sigh*

The ultrasound this morning showed an inflamed liver. His blood work confirms this - but the doctors aren't majorly concerned. The steroids will irritate the liver some - and so far Callum's blood work shows the liver is still functioning fine, just a little agitated.

His echocardiogram came back great - his heart looks good and healthy, pumping blood as it should, if not a bit fast (duh). ;-) It *did show the PICC line is sitting a little on the atrium wall, which isn't horrible but could be "tickling" the heart some. The thing is, however, when they've seen this before, the tickle usually causes a more sporadic and irregular heart beat vs a very consistent (but fast) heart rate that Callum is experiencing. So, the doctors aren't convinced the PICC line is causing the tachycardia, but they haven't ruled it out either. Instead, they suspect it's his inflamed liver and possibly an infection (since he came in with a fever) that's causing the tachycardia.

So for now, the game plan is to continue to monitor his heart another night. We'll draw more blood tomorrow to review his liver function. Assuming it'll stay the same or begin improving, they may discharge us tomorrow.

We'll also revisit whether to fix his PICC line or not - there are pros and cons to messing with the line right now. We could pull it out a bit to quit bothering the heart or remove the line completely. Both of those would be traumatic to Callum, since pulling the line out a bit is like getting a dressing change which he hates. Removing it completely means we'd have pokes for any subsequent blood draws we need to do, before his port surgery (which has now been moved to Monday and could always get moved again). And, we're not sure any of this will resolve his tachycardia.

I think the doctors are hoping his liver calms overnight, which then will calm down his heart rate to more "normal" levels and allow us to go home. We'll see.

All of this has been stressful and worrisome, but we DID get some good news today too!

We signed consent forms today for the remainder of his treatment plan and we start up with the next phase, called Consolidation, on Monday. The plan we've been assigned was one I was a little more eager about - mostly because when I worked out the schedules for each, this one was roughly 8 months shorter overall (!!).

Neither is a better plan, they both have the same (very high) curability rates. They just use different drugs at different doses and intervals. The one bummer about this plan we're on, is that we'll have 6 hospital admissions (lasting 2-4 nights) during Consolidation. But, at least it's something we can plan around (vs this fun visit we're doing right now).

All in all, everyone is happy with how he's progressing which is nice.
Posted by Mama Bree at 9:09 PM