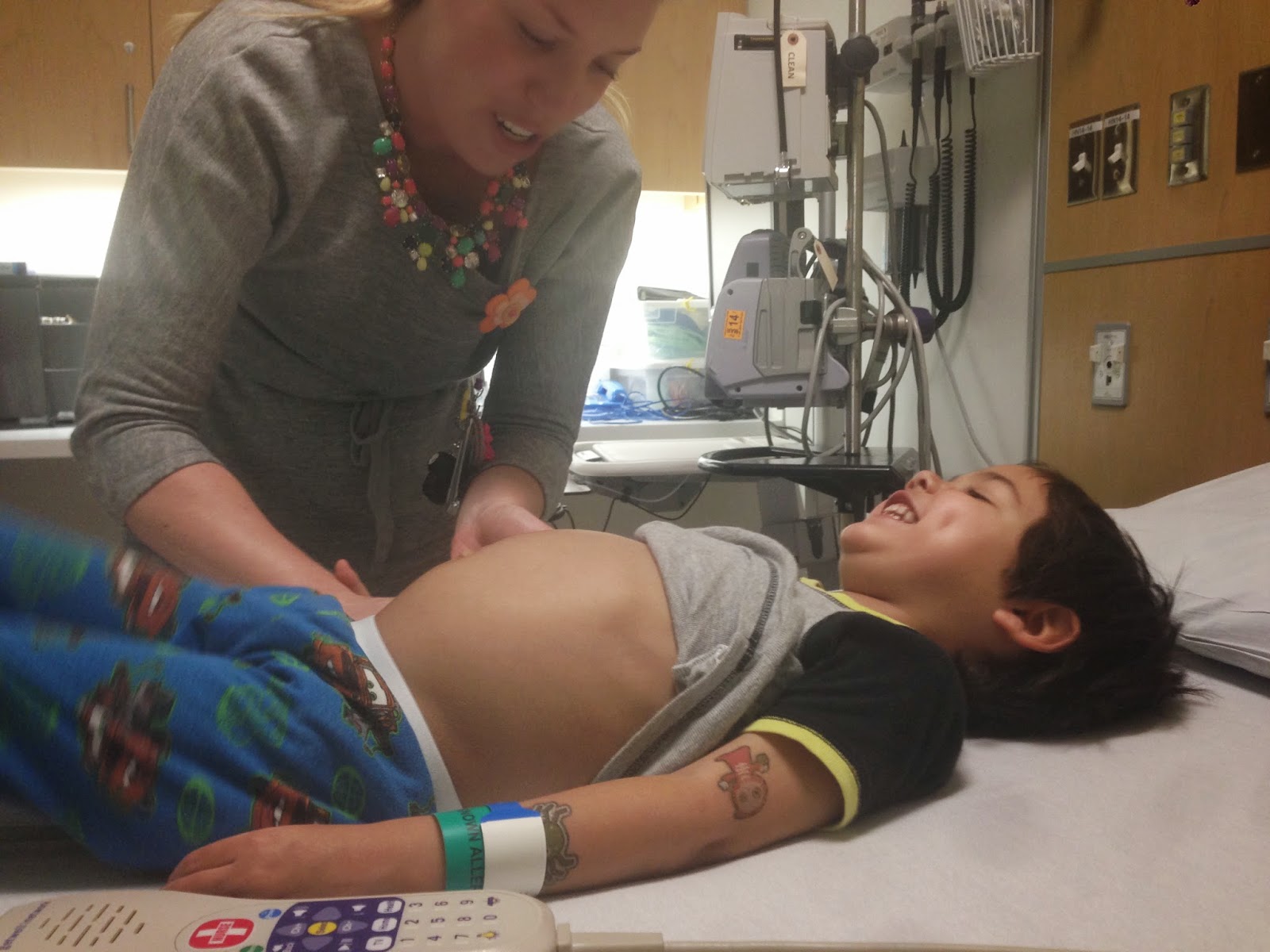 "That's impressive!" Nurse Carly said, when she saw Callum's belly.  I just looked at her and Dr. Lacayo and said yeah but isn't this what you warned us of?  She said yes but.....  hahaha!  :)

I think because poor Callum's stomach became so distended SO BIG and SO FAST she was amazed.  Nothing to worry about - we just need to make sure he keeps pooping regularly (which I'm watching carefully) since NOT pooping right now could be 10x worse.

And, since he's had so much pain from the gas and pressure, she wrote me up yet another prescription (yay!) of simethicone, to help with the bloating and general uncomfortableness.  Thankfully, this one he actually GULPS down, so it must taste good.  ;-)

After general chit chatting and catching up on how he did over the weekend, and listening to his stories of HOW EXACTLY we make Mac n' Cheese, Nurse Carly and Dr. Lacayo gave the all clear to administer his chemo (vincristine), which was a simple push thru his PICC line, seen here.  The nurses also took care of his cap changes for me (which are due every Monday and Thursday) so I didn't have to worry about that when I got home. 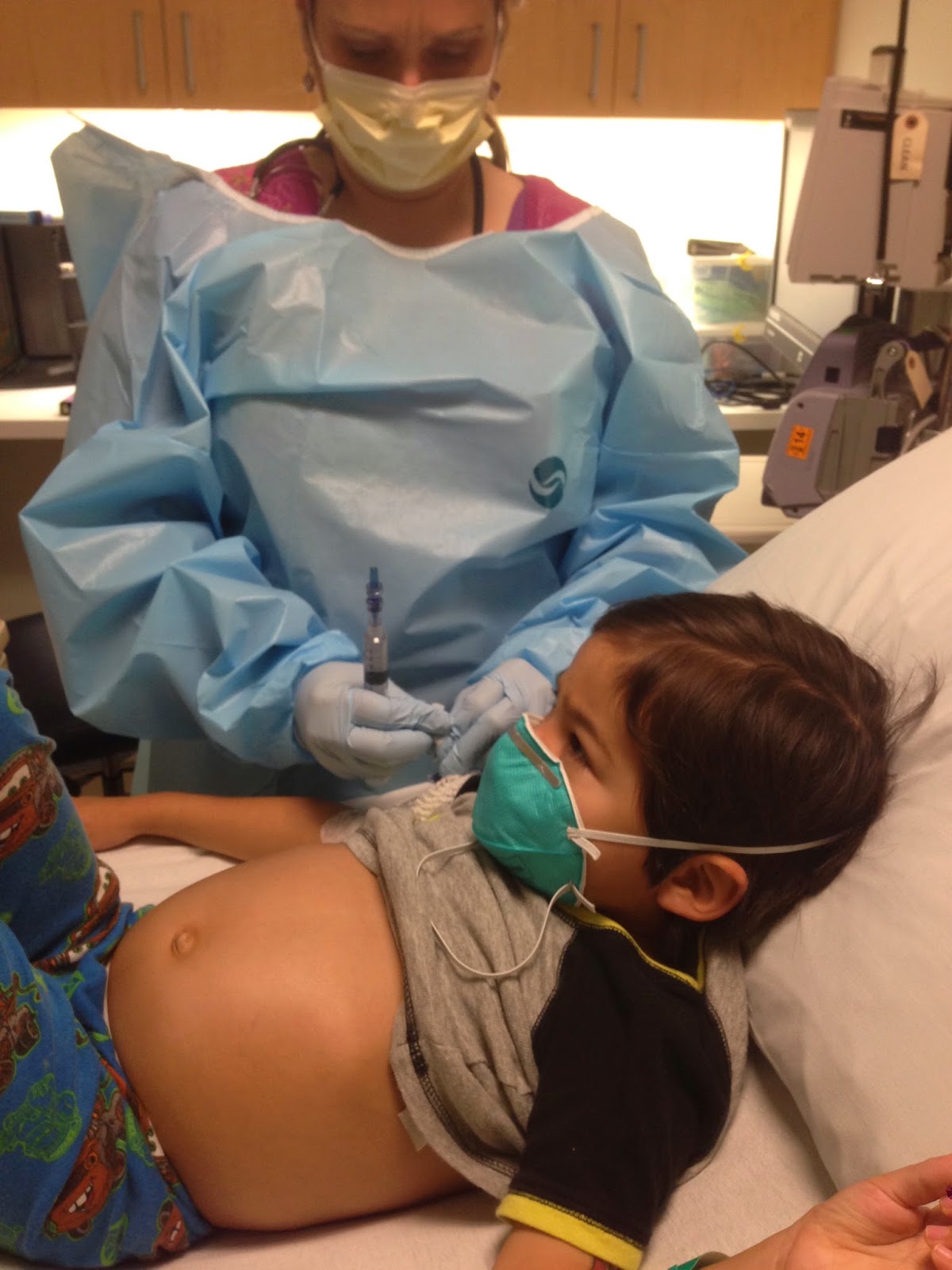 Aside from long periods of waiting in between, all of that went just ducky.  The last part of our visit was not so fun though, as every week we must also get his PICC line dressing changed.  This is an important part of his PICC line maintenance - where they remove all the adhesive that keeps the line in place, take it all off, clean all around his line (which isn't sutured into his skin or anything, it's literally just a tube that's hanging out of a hole in his arm, once the bandages are all removed), and then add all of the bandaging back on.

Because it's important not to disturb the line, the adhesive they use is crazy strong - so it hurts like hell when they have to take (rip) it off.  AND, because they can't disturb the line, it's critical that Callum stays super still throughout the whole thing, so that the line isn't pulled out (or pushed in) during the process.

Thankfully, he doesn't move a muscle (even when he's had multiple pokes for his regular IVs, he's always been good about keeping still).  But, it's painful and traumatic as you can imagine, and he hates it.  I do too.  :(

After we were done, I hugged him tight, "You did FANTASTIC buddy - I'm so proud of you!"

Mommy, since I was fantastic, can you make me an extra big bowl of Mac n' Cheese when we get home?

We listened to Christmas music (his request) on our long drive home (we hit traffic and it's been raining) - but we were both happy, once more, to be outta that place.

The hospital has all sorts of programs to help get the kids through their treatment.  I mentioned the Monkey in my Chair program already - the other program they've introduced us to is the Beads of Courage program.  Callum starts out with a cute little (Cat in the Hat) bag to carry his beads, the letters that make up his name, a string for his necklace and a journal where he can mark which milestones he's accomplished so far throughout his treatment program.  For each of those milestones, he gets a bead (which we mark on his journal and can collect from any nurse while at the hospital).

Callum has already earned a ton of stripes in a short amount of time - look at his collection of beads so far!!  These include beads for things like a Bone Marrow Aspirate, Chemotherapy, Clinic Visits, Dressing Changes, Inpatient Admission (one bead per day), Line Placement (i.e. PICC), Lumbar Puncture, Pokes, Transfusions, etc.  The list goes on and on!! 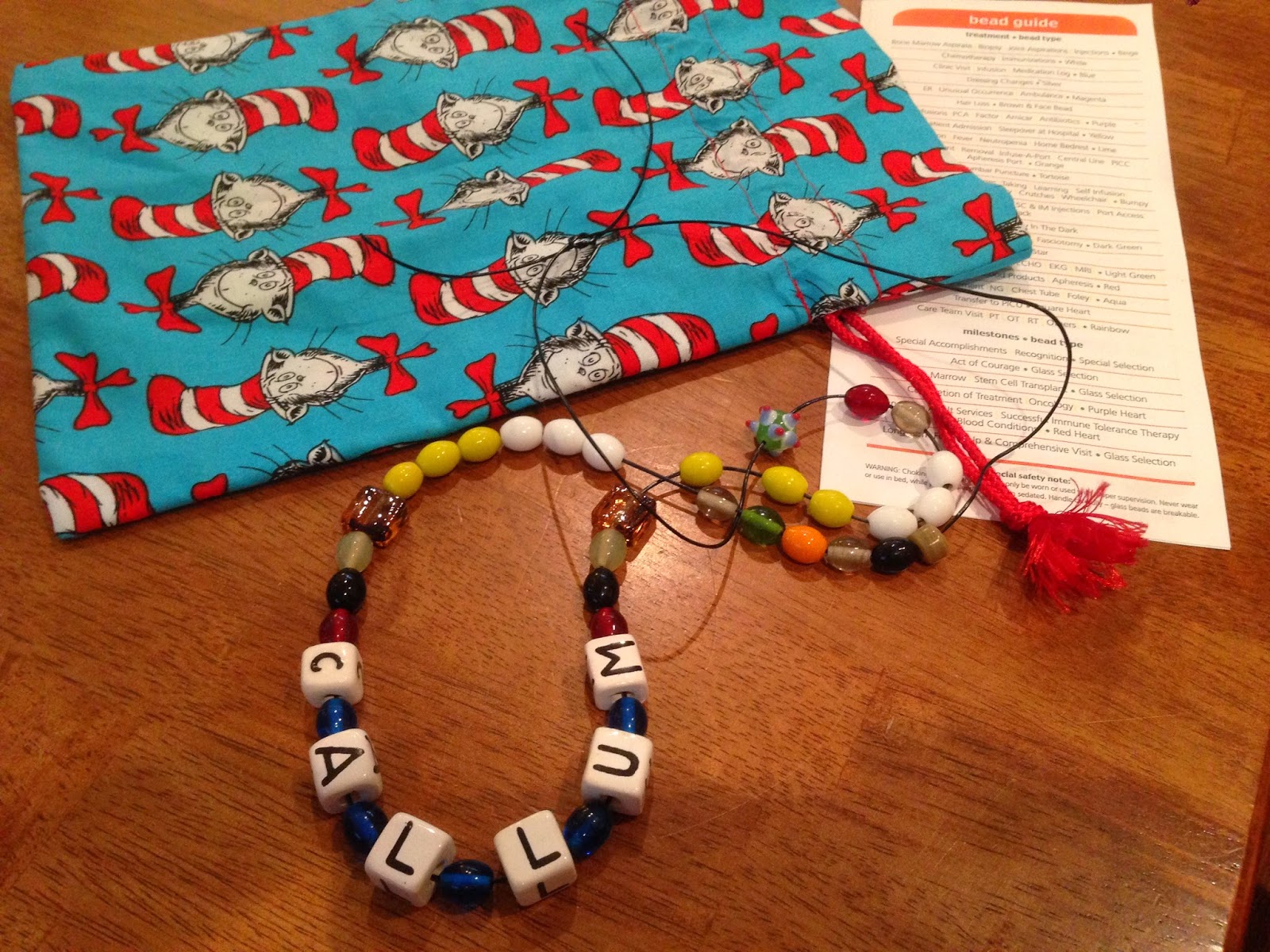 Yesterday, when Jon dropped off George the monkey, at Callum's school, they gave him a big stack of handmade "Get Well" cards from the (school-aged) kids at Callum's school.  They were all so very lovely and really wonderful to read through.  Some of my favorites are shown here at the top of the stack - like the little girl who described Callum as: Creative, Awesome, Loveable, Lucky, Unique and Magnificent!  I think she's onto something.  ;-) 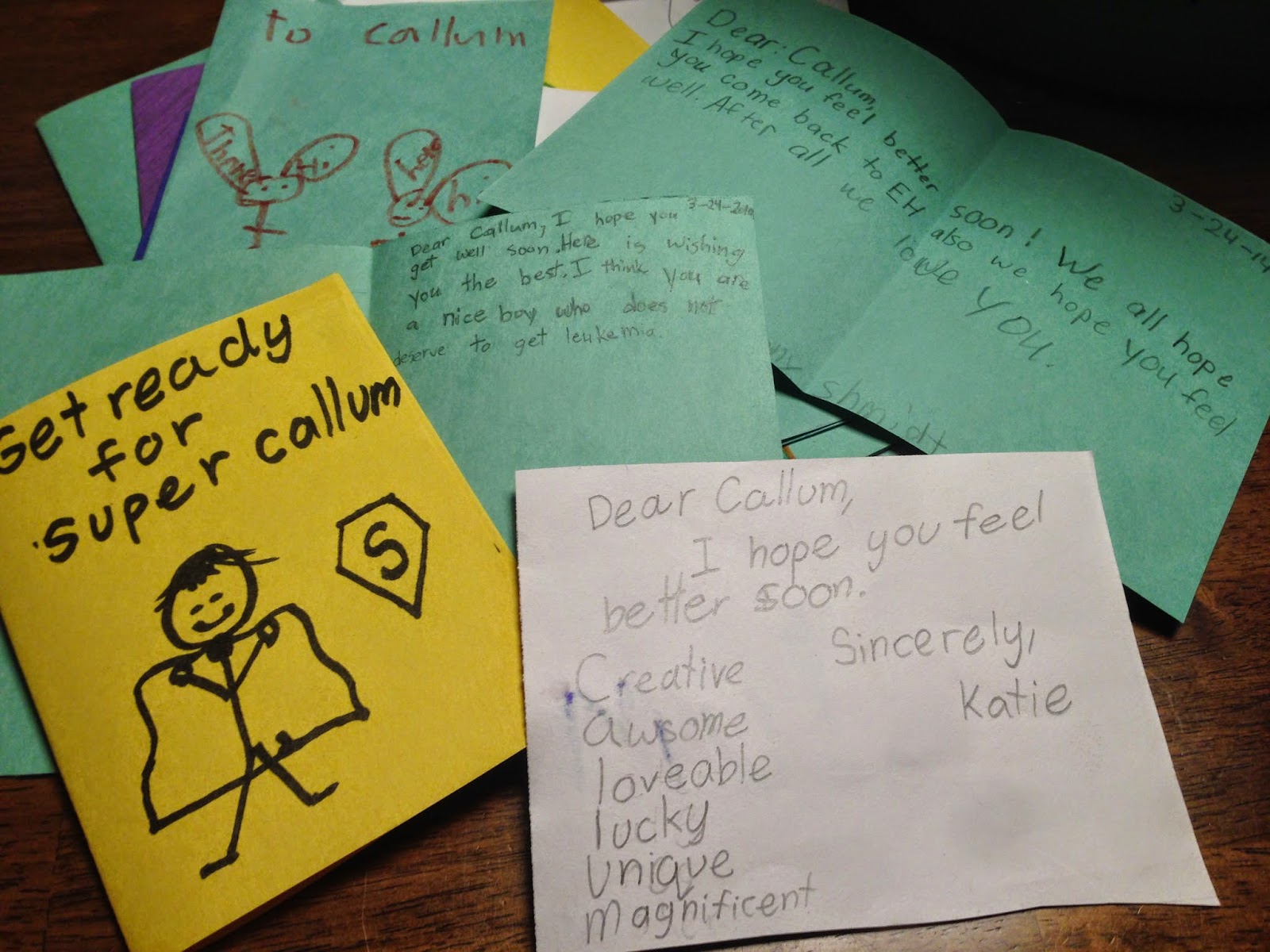 I remember the beads from when Anna was there! I can't remember if Sarah started collecting them though.