The emotional roller coaster ride of a kid on steroids 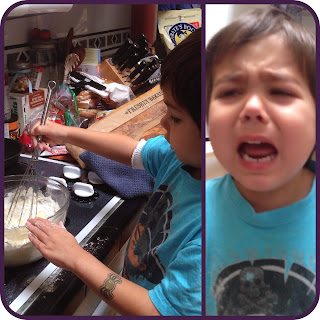 On the left, having fun whipping up some pancakes when the boy requested.

On the right, reaction after seeing Paul had put syrup on the top of his short stack, instead of on the side (for him to dip each piece into).

It took a few minutes to calm him down and show him we had already fixed the dilemma - in the time it took him to throw a tantrum. ;-)

Today's visit went great! Lab work continues to look good - his neutrophil count (which is probably what we're most focused on right now) has increased a fair amount from Monday (to the highest it's been since he was diagnosed I think) which is fantastic.

I had some consent forms to sign to get the ball rolling on his port line procedure (which I'm hoping they'll schedule at the same time as his upcoming bone marrow and lumbar puncture). The port will be an internal line embedded under his skin, in his chest, to replace the PICC line we've had to date.

We also briefly discussed the next phase - Dr Lacayo feels we're heading toward the "low risk" protocol next and asked the nurses to have our paperwork/consent forms ready for us on Monday to begin reading through so that we'd have all of our questions answered ahead of time, and then be ready to sign quickly at the end of induction. I think he's getting to know us and our style. ;-)
Posted by Mama Bree at 2:39 PM