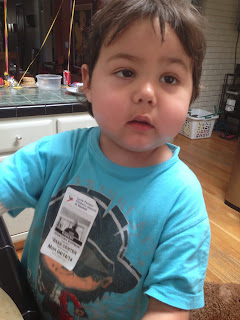 Normally, Callum is eager to take off his badge (sticker) and hospital wrist bands as soon as we're home.

But today, he wanted to leave his name tag on for awhile. He said he didn't want to take it off because he wants to be a part of our family. :)

Everything went really well today. He had his Day 29/30 bone marrow aspiration, lumbar puncture (where they remove some spinal fluid to check for leukemia), an IT (where they proactively administer chemo to his spinal fluid) and a dressing change of his PICC line. He woke up pretty quick after the procedure, so when I walked into the recovery room the picture I saw was two nurses leaning over my son, listening intently, as he was vividly describing to them (hand gestures and all) the type of cereal we needed to go buy (cinnamon toast crunch), with milk, in a glass bowl, that he'd eat at the big table, once we got home. :)

While sitting in the waiting room, I friended two other moms, one whom I've seen a few times before. She has a 3 year old boy, who also has leukemia, diagnosed in November of last year. They live in Monterey - so now it makes total sense why every time I see them, they've got a huge wagon full of stuff they're carting around, or a suitcase they're rolling around with them (and she's knitting what looks like a King sized blanket). She says they only need to come once a week now, so I guess that's a bit better for her to manage, but dang what a drag!!

The other mom has a daughter, in 3rd grade, who is fighting lymphoma. The girl was very mature and wonderful to talk to. We compared notes about what types of meds Callum likes and doesn't like vs what she likes and doesn't like. She was aghast that he's fine taking Septra without any assistance (with a syrup or something) and was shocked to hear he hates Zantac and needs syrup to get that one down. :) I enjoyed meeting both moms but I really enjoyed listening to this little girl and her perspective on life more than anything.

Dr Lacayo called me at home later in the afternoon with preliminary results from Callum's bone marrow, stating everything looks good. This test is a 1 in 1000 resolution whereas the test they send up to Seattle (MRD) is 1 in 10,000. So, while it looks good (and as he expected) so far, we'll wait for the final results from the MRD to classify us for the next phase. Once we know what we're classified as, we sign another round of consent forms and are assigned the next protocol to follow (the next phase is called Consolidation, and that starts next Monday).

If we're lucky, the classification and paperwork will happen by our follow up on Wednesday. But if the results aren't back by then, Carly will call me to let me know and then we'll take care of paperwork on Friday instead, when we have to come in for Callum's port surgery.

Other than that, we get to relax a tiny bit this week and get a bit of a bye on meds, before our next round on Monday begins. It's really weird only having a couple of things to give him each day, but we are all enjoying it. ;-)

And the timing couldn't be better! Since Saturday is Callum's birthday, I asked the doctors if we'd be allowed to go out and do a couple of small things to celebrate. Carly cautiously said yes but does reserve the right to pull back later this week if he's not doing well. Totally makes sense so I'm just going with the yes for now. ;-) I think it'll be good for us all to get out and have a little fun before the next round hits us.
Posted by Mama Bree at 10:50 PM