Today was our last vincristine dose, as a part of the induction phase!!  We're in the home stretch of this first crazy month and it's nice to have something (if small) to look forward to.  Callum's numbers have recovered quite nicely - his neutrophil count is practically "normal" which is fantastic.  It means his body is bouncing back and producing healthy bone marrow once more.  :)  In fact, his doctors feel so comfortable with his numbers at this point, that they've scratched our Thursday appt off the books and moved us down to one clinic visit a week.  Yeehaw!

So, we keep as we have - and will return on Monday for our BIG DAY.  On Monday (Day 29/30) Callum will be put under again.  He'll have another bone marrow aspiration and lumbar puncture done.  They'll take some of his spinal fluid to run analysis on (as well as administer another round of chemo while they're in there).  Part of his bone marrow will be shipped overnight up to Seattle again - and similar to Day 8, they'll be looking for any trace of leukemia left in his bone marrow.  This is a big test, as it will let us know whether Callum will officially be in remission or not, and more importantly, will (re)classify Callum's risk level, which will then determine his next phase(s) of treatment.  Given his Day 8 test came back with 0% leukemia cells present, our medical team is very confident his Day 29/30 will remain 0%.

So, during our visit today we talked through all of this (the types of medication and schedule we'd follow depending on the phase of treatment we're assigned) as well as the next procedure we'd need to schedule - getting his port implanted.

I was really hoping, since he'd already be under, for his Day 29/30 procedure, that we could kill two birds with one stone, so to speak, and get his port implanted at the same time (he needs to be under for that too, since it's a surgical procedure).  But, after discussing with our drs, it turns out we'll have to schedule them separately since we can't risk disrupting his chemo schedule and sometimes the surgeons have emergencies and end up rescheduling the port procedure.

Having the central port line in will greatly improve life at home - I won't need to worry about flushing his line daily or changing caps twice a week.  We won't need to worry about protecting it from getting wet during bath time (which is a PAIN IN THE NECK).  And he'll be able to behave more "normally", by participating in sports and swimming and stuff like that, that normal 4 year olds do.  :)

We have ALL of this to look forward to in the next week, but I think the thing that Jon and I are most excited about (oh who am I kidding, I'm pretty excited about learning which treatment plan we'll be on next, so I can schedule it out) ;-)  is that after Saturday night, we stop the steroids!!

Since Callum has swelled up so large, he really is becoming quite unrecognizable.  And, his food cravings are insane, which means I pretty much spend all day fixing him food or arguing with him that he needs another break (which I've now resorted to set timers on, between each snack).  And his mood swings are outrageous, which has really tested the best of my patience and love of this child.  ;-)

Anyway, suffice to say, we are REALLY. EXCITED. ABOUT. SATURDAY.

I don't have many pictures from this past weekend, but I do have a couple to highlight.  First, here's a shot of Callum, after bath time, above his head.  When his hair is wet, you can see that he's actually lost some hair!  When it's dry though, you really can't tell the difference.  :) 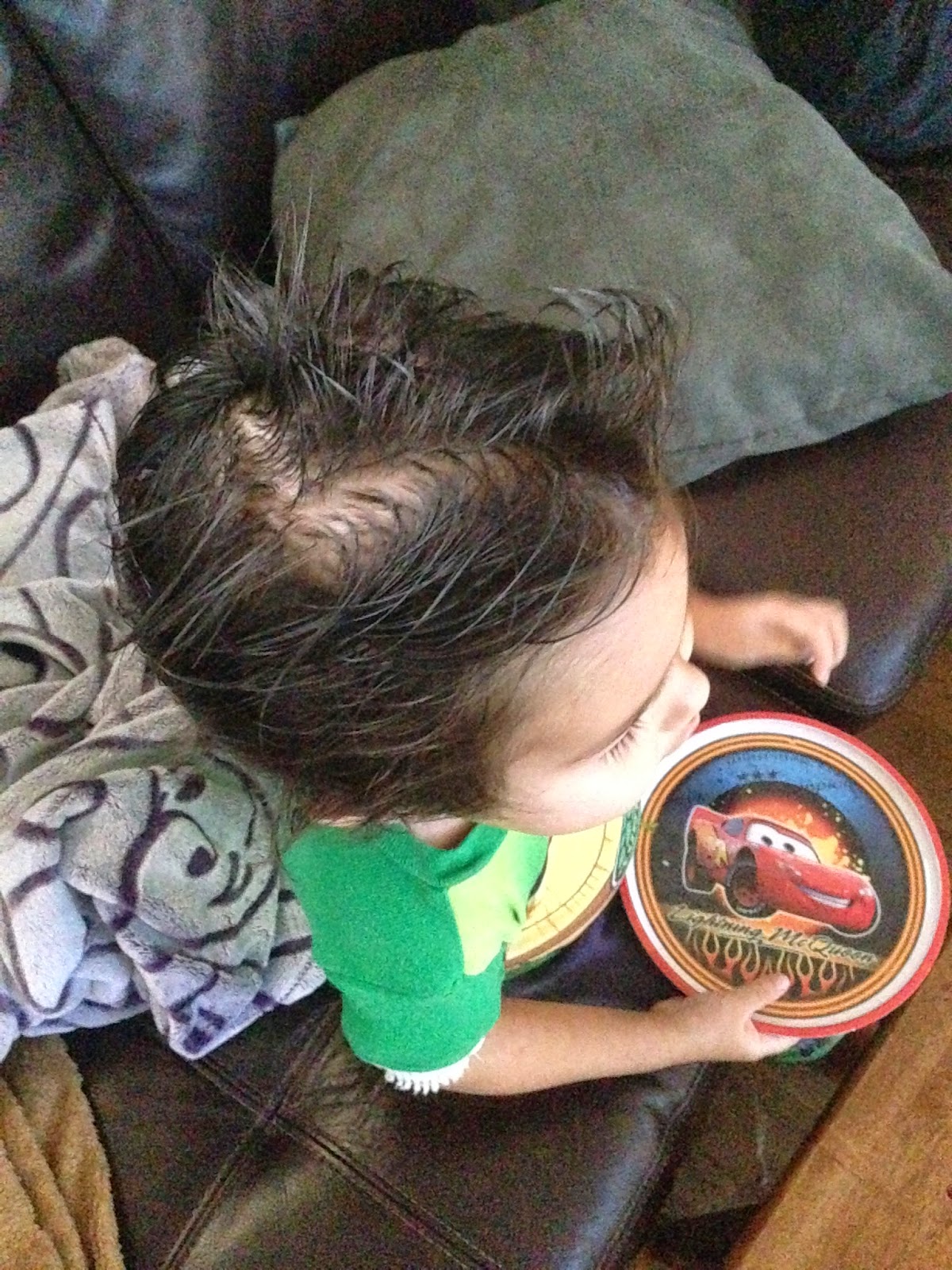 Both boys woke up ridiculously early yesterday morning - which sucked more than usual because it was still dark outside, and both Jon and Paul had left to play golf.  I may need to rethink those guys going out to play golf right now!  It made for a very long morning (and day).  Ugh.  But, look at how chipper Logan is to have found his iPad and bug his Mom with the bright screen while she's trying to sleep!  ;-) 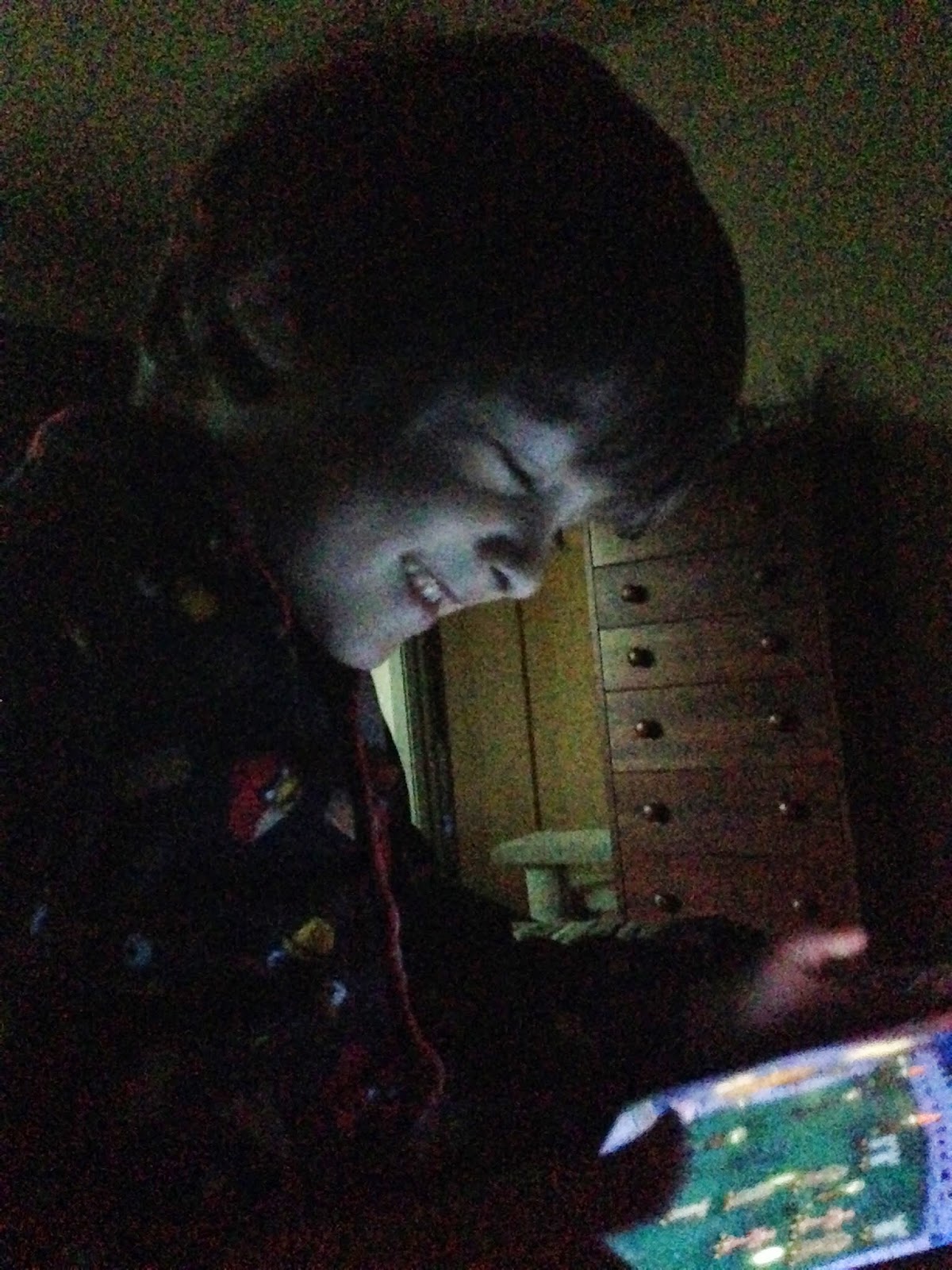 The other thing we worked on this weekend was learning how to play Pokemon, the card game.  As I've mentioned before, Logan has become REALLY obsessed with collecting the cards.  Lately, he's also taken up watching the TV show, which has actually helped him understand the characters, names, and how they interact with each other.  Strangely, this has all set us up for learning how to play the card game next - which he now understands much better BECAUSE of the TV show.  Jeez, who would've thunk it!

So, I got to be the first guinea pig - he and I played a few rounds to understand how the game works (and then I gave Jon a crash course to get him up to speed too).  Once Logan had the basics down, he and Jon played a couple of games together.  Check out how serious the two look here!  :) 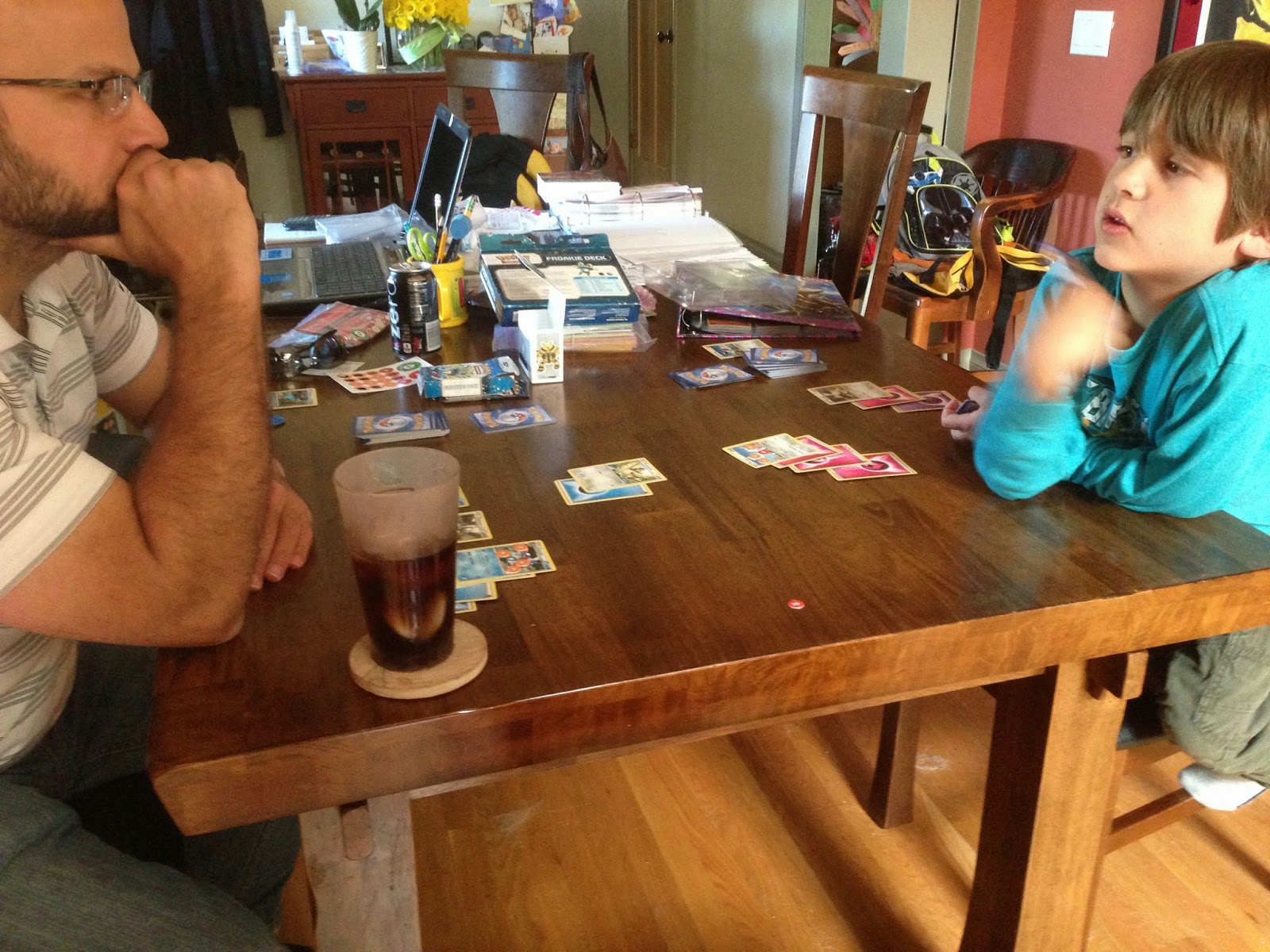