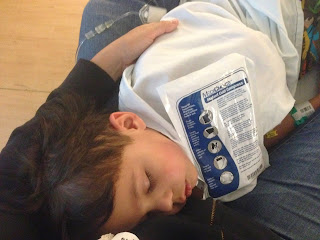 Well, we just finished one of the more traumatic accesses that Callum has been through in some time. :(

I suspect it was harder for him because he's likely sore from being accessed for a week. But the nurse certainly didn't help - it felt like she was operating under molasses - every movement of her's was slow as hell and I finally had to tell her to just get on with it and go (in as nice a manner as I possibly could with my freaked out kid screaming and squirming in my lap). :(

After it was all done we put an ice pack on him since he was screaming of the bandage itching him. I think it's due to his skin being sensitive and raw from this last week and not liking more adhesive put on, more than anything. Once the cold ice kicked in, I got him to calm down enough to fall asleep.