Company for the day 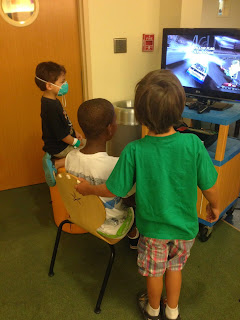 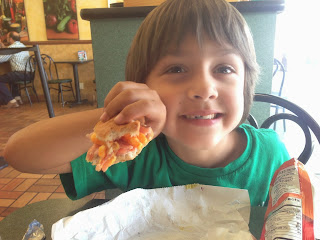 I decided to bring Logan along with us to the clinic today. Our social worker had said earlier on that it would be good for him to see that the clinic visits aren't all they're cracked up to be so that he'd realize he's not missing much.

Of course, the minute we arrive, another kid is playing a video game so the boys quickly made friends with him in the waiting room. And then during Callum's blood draw, Callum hardly yelped or winced once! LOL But, Logan did get to see the blood draw and see that most of our time is "boring", spent waiting around and talking to nurses, which I suppose is good.

I did have one of the nurses look at Callum's ingrown nail while we were there, since it seemed more inflamed last night (and I squeezed out a tiny bit of pus!) :( She wasn't super alarmed but we have decided to play it safe given his counts are a bit lower today and we have a hospital admission planned next week. So, I've now got to give him an antibiotic cream and oral antibiotics 3x a day...

The boys were getting super grouchy as we neared lunchtime so we made a quick stop at the "sandwich shop" (where Logan was proud of his new invention, Cheetos inside his sandwich). ;-)