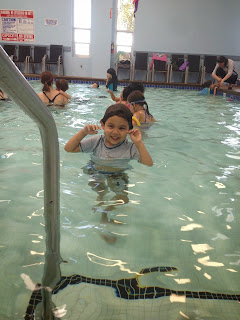 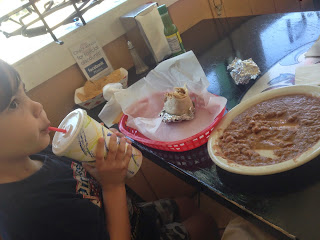 Darn it. I meant to post this yesterday but totally forgot.

Anyway, we had another swim lesson yesterday. Callum did so-so in his lesson but finally warmed up and had a great time in the free swim area (jumping and dunking himself non stop).

He's been a little off and out of sorts all week. I had forgotten to mention that in addition to being back on vincristine this week, we're also back on another pulse of steroids. Ugh.

And by yesterday, it felt like they were starting to kick in. Since, after swim class his requests were to first go to our (usual) taco place (the last pic shows him chowing down on his chips with beans, a bean burrito - which he almost finished completely!, and his yummy horchata). After that, he wanted to go to the spaghetti place, the hummus place and then home. And then after home, the coffee shop. LOL

Suffice to say, we made it to the taco shop and then he passed out when we were back in the car (phew!).
Posted by Mama Bree at 11:01 PM