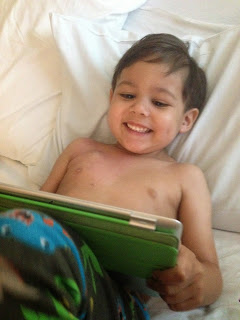 Man, Callum has been such a champ! I took this pic mere seconds after they removed his dressing and access - what a big smile!

It's been a week since they first accessed his port, which means we have to change his dressing (the adhesive around it) and, what I didn't know was, we also have to de-access and re-access his port. This means pulling the needle out and then poking him again. :(

I was really hoping we wouldn't need to do the dressing change today, and that we could just take everything off and go home. But, unfortunately, his counts decreased again overnight. He's still neutropenic and in fact his ANC is the lowest it's been. *sigh*

So, we are staying another night, at least (possibly more since they want to see his counts start to recover before we can go home). It's starting to get harder for both of us, being gone so long. I think we're both really missing home a lot and just getting tired of this hospital routine, filled with constant interruptions and meds and visitors and sitting in one room. Callum had a little meltdown last night while we were playing Candyland and cried himself to sleep, sobbing for his Daddy. :(

Since they're giving him a break from his access before the next set of meds, I'm going to see if we can go to the hospital playroom or maybe take a bath or something different. We'll see if I'm successful. ;-)

Meanwhile, Logan is also having a hard time since he misses us both too. Definitely a rough patch we're going through but still hopeful Callum's counts will recover soon enough. The good news is that everything else looks great - he continues to be fever free and in good spirits. You'd never know he was as sick as he is by just looking at him!
Posted by Mama Bree at 2:21 PM