Neutropenic with a fever 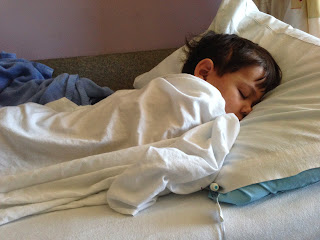 Callum had been complaining of his tummy hurting most of the morning, and felt pretty warm to me by about midday, so when the nurse came in for his blood draw, I asked her to take his temperature to see. Sure enough, what I was afraid of was true, he had spiked a fever (102.2). His heart rate was also up, around 140bpm or so. :(

We had also just been talking earlier in the morning, during rounds, that his counts came back low from his morning draw and he is neutropenic. So, unfortunately, being neutropenic *and* having a fever, meant they'd need to arrange a transfer back to Stanford where there's more immediate support, staff and meds available quickly if anything more serious were to happen.

So, because of the fever, they immediately took blood and urine cultures to run (but results from those don't come back for a few days). And they gave him another antibiotic (in addition to what he's already on, for his ingrown toenail).

His state was rapidly declining, so he had a cat nap in between the flurry of doctors coming in and out to examine him and nurses medicating him. (I think it was overwhelming for both of us). He was burning up and feeling absolutely miserable, refusing to take any Tylenol which I was begging him to take. I finally had to force it down him, which was just awful for both of us. That was about an hour ago - so I'm sure it's kicked in now since he looks 100x better and is even watching some TV (he wouldn't do anything but curl up in a ball on my lap earlier, which had me really worried).

Now we're just waiting for our transport to arrive so we can head back up to Stanford.

Sadly, all of this means our hopes of going home tonight have been rudely dashed. Now we'll be lucky if we go home before the weekend (since he won't get discharged until he's been clear of his fever for 48 hours and his counts recover so that he's no longer neutropenic). What a big bummer. :(
Posted by Mama Bree at 2:58 PM