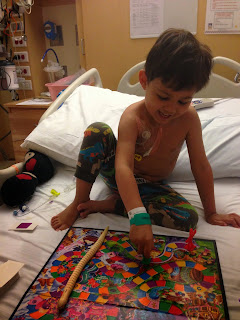 Callum's last fever was Friday night. And boy how being fever free really makes a difference! He's been back to his goofy, singing and dancing self all day yesterday and today. Thank goodness! :)

However, his counts are still a little low - we really thought we'd get discharged today but his counts dipped again a little from today's blood work, so the team wants to keep him another night for monitoring. :( The attending suspects he had a viral infection (of what, we don't know, since all tests came back negative, but they really only catch a handful of the major ones).... So the lower counts are probably due to bone marrow suppression from the virus, however he wants to make sure the fever doesn't return (and if he let us go home, that would certainly mean an ER visit which they always try to avoid).

They also removed him from fluids today, which Callum likes since he's "free" from his pole. They'll hook him back up later to administer his next dose of antibiotic, but otherwise they're ok keeping him off. They also stopped one of the antibiotics, vancomycin, which the attending says is a bit of a test, to see if the fevers will return or not.

So far so good! Keep your fingers crossed we have another great day and counts start to recover so that we can (finally) head home! I, for one, am sore and tired and missing my bed. ;-)
Posted by Mama Bree at 1:30 PM