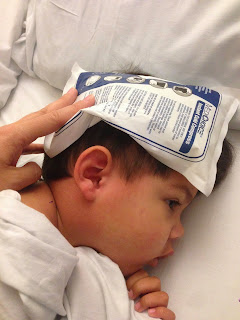 Yesterday morning, just before rounds, and just after an infusion of a new antibiotic, Callum spiked another fever and also had an accompanying rash shortly after the infusion. His neck, ears, upper back and a trail down his mid back to his butt all lit up with a big blotchy red patch. He was miserable from the fever no doubt, but the rash was also terribly itchy, causing him to practically rip his hair out. :(

As it turns out, this type of reaction is pretty common after an infusion of vancomycin (the new antibiotic they have added to his treatment), so common that it's called the Red Man's Rash or Red Man's Syndrome. :( Luckily it goes away pretty quickly (we gave him an antihistamine and we got Tylenol in him for the fever). Subsequent doses have now been slowed down over a 2 hour infusion (rather than 30 min - 1 hour) and that seems to have done the trick as he hasn't had any more reactions with the rash. Phew!

Still, pretty crappy and no fun at all. Ugh.
Posted by Mama Bree at 1:49 PM